“The Kyoto Tachibana Brass Band, which is full of energy, full of smiles, and full of dreams, is like a vitamin to modern society, where people tend to feel depressed. The attitude of trying hard gives hope and courage to those who see it. When you’re feeling down, watch Kyoto Tachibana’s performance and get an orange energy injection.” – Marching Navi, June 20, 2022

Band parading at streets of Osaka in 2015

They are fondly nicknamed as “Orange Devils” (in Japanese: オレンジの悪魔) due to their trademark full-orange uniform and tendency of winning band competitions.

It is a matter of honor for the band to express the battle cry in a way set by tradition. The cry has not changed at all since the beginning. It is “Tachibana tension, Agatte-kita, Hai, Hai, Hai, Hai, Hai, Hai, Hah-i, Se-no, X (and cheers)”. Seven “hai’s” and long pronunciation stretch at the end. “Se-no” is the same as the “1, 2, 3, 4” before the music starts and is a common shout used by the Japanese to set the timing. “X” is the annual motto unique to each year.

(see more of “Tachibana tension!” from the interview here, scroll down to “Battle Cry”) 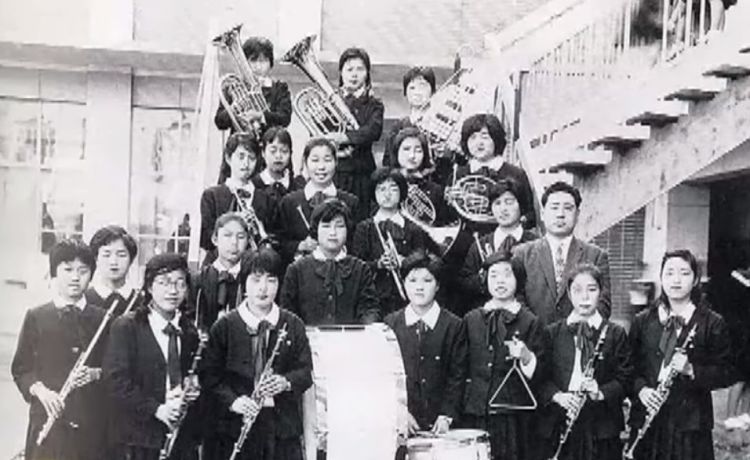 Kyoto Tachibana High School Concert Band was founded by legendary professor Hisashi Hiramatsu (1935-2021) in 1961 with 16 members. With the intent of improving the girls’ health it soon evolved to one of the oldest female Marching Bands in Japan (see info on their 50th Anniversary Concert in 2012 here (Wayback Machine), in Japanese).

Band is formed out of students of the school Wind Music Club and has usually around 100 members from which typically only handful are boys. Wind Club activities are traditionally preferred by girls in Japan (boys tend to go to baseball or soccer clubs). They train before and after school hours as well as in weekends, holidays included, and are regular participant in All-Japan Marching Contest (5 National Gold Awards in 2008, 2009, 2015, 2021 and 2022, 3 National Silver Awards in 2007, 2011, 2014). First overseas trip took place in 1975 to Harrogate, UK (see more here), and later the band has visited Hawai’i every three years from 1981 (first to Maui and from 1998 to Kaua’i) to 2016. They participated in the 123rd Tournament of Roses Parade, Pasadena, California in 2012 (see more here) and in the 129th Tournament of Roses Parade in 2018 (see more here). In 2022 they were invited to Taiwan to play at the National Day Ceremonies as the first foreign performer in these celebrities (click here for more information).

Due to their fame the band has also been invited to participate in several wider-scale entertainment projects. They played as the background band for the promotional song of the 100th Summer Kōshien (Japanese High School Baseball Championship) in 2018 (for details click here), they collaborated with J-Pop singer Kalen Anzai at her music video in 2019 (click here), and they played at the soundtrack of the anime movie “Belle” in 2021 (click here). 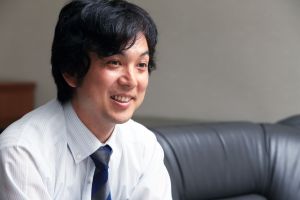 See news article of his appointment here, and interview here.

His interview at band official site is here (in Japanese).

After resigning Tachibana in March 2018 he went working at Toyonaka Municipal First Junior High School (see more of that here), retiring from there year later. In April 2021 he started as Music Director of the brass band of Daisho Gakuen High School (website, Wikipedia).

See more of his book on Tachibana here.

His Wikipedia-entry (in Japanese) is here.

Tanaka-sensei speech makes the audience roaring with laughter (in Japanese way) (video by 慶次郎前田, starts at 0:10): 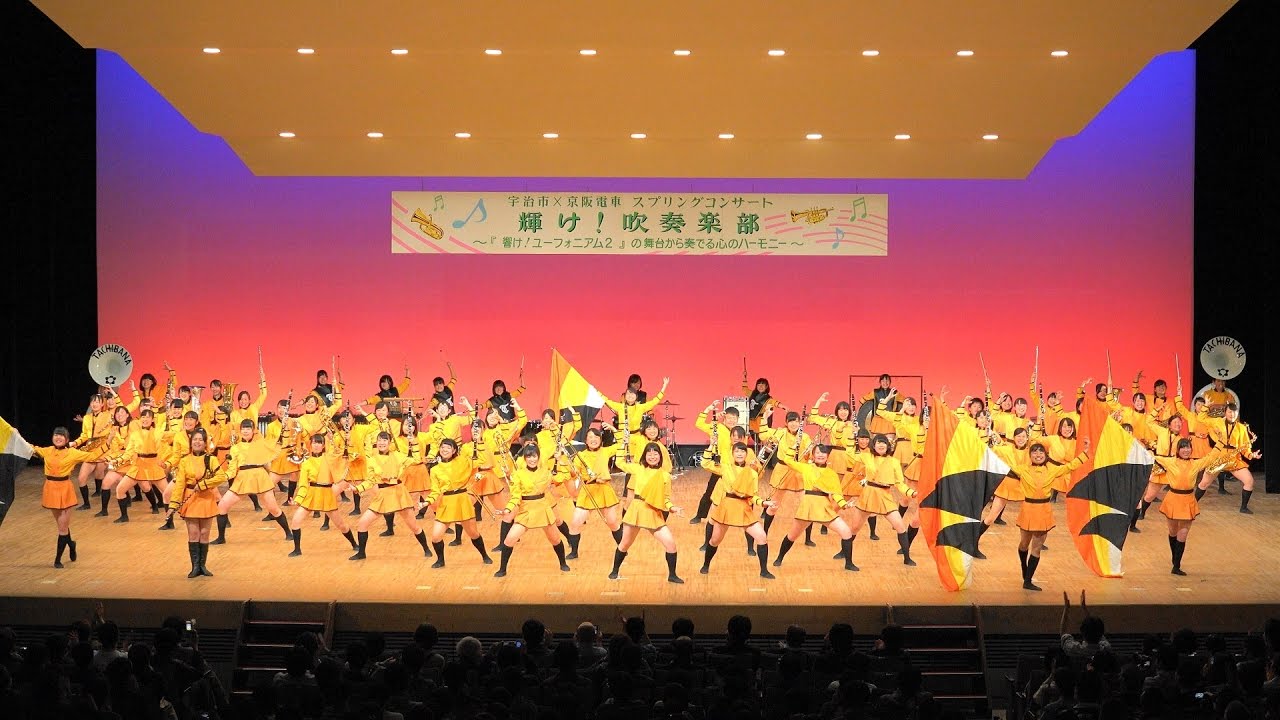 See his interview here, and his Wikipedia entry (in Japanese) is here. 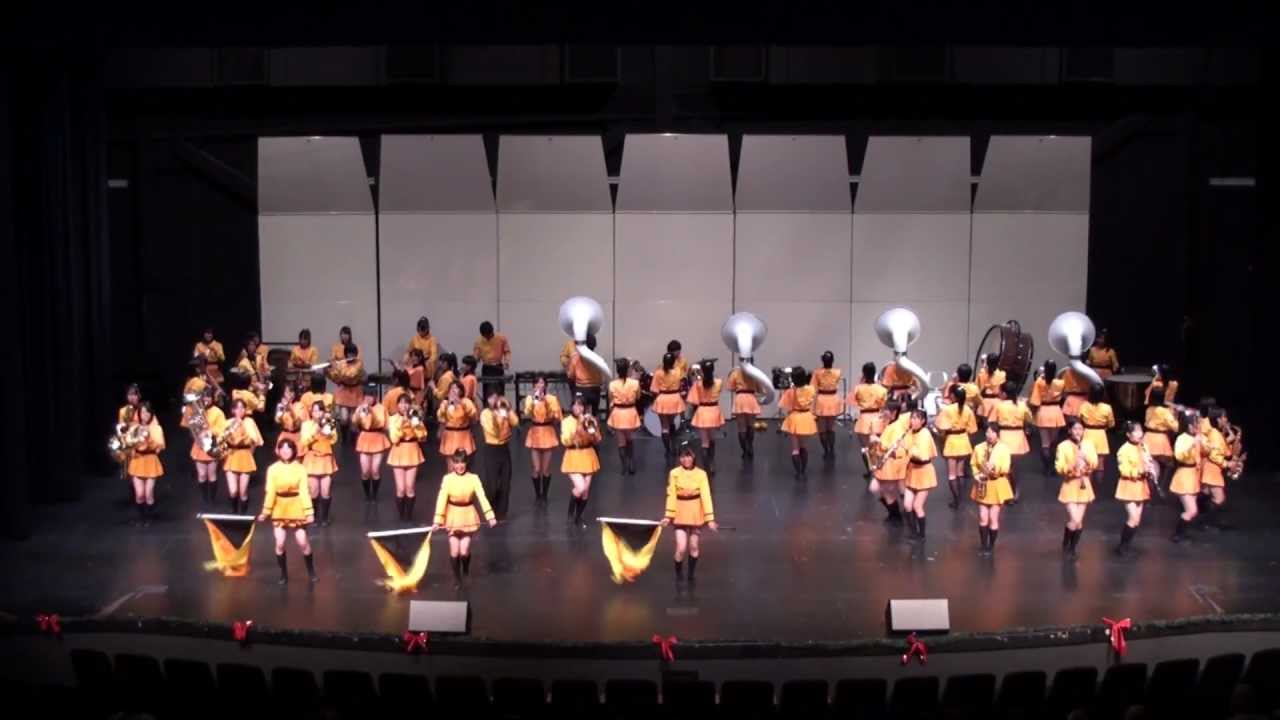 Her interview at band official site is here (in Japanese).

See her interview here, and her introduction at school site here (Wayback Machine) (in Japanese).

Drummer Nanaho Shima (“Mentapu”) of the 111th Class was appointed as the Marching Coach of the band from June 2020. Previously she was at the drum-set of Mandarins Drum and Bugle Corps (member of DCI), and later Dark Sky Percussion (member of WGI) and INOV8 (also member of WGI). She has also worked as the pit instructor for Marching Band 輝合 ~Teria~.

His Twitter-account is here.

The band votes the future drum major from the freshmen in October of their first school year. She will serve as an assistant to Drum Major during her 2nd year, and will finally be promoted to full Drum Major for her 3rd (senior) year. Main responsibility of the Drum Major is to arrange and supervise all training of the band.

When using the orange uniform Drum Major can be recognized by her silver-lined shawl. In the video below Drum Major “Ron” climbs up to podium and leads the band through two first songs at the 38th Annual Pasadena Tournament of Roses Bandfest in 2017: 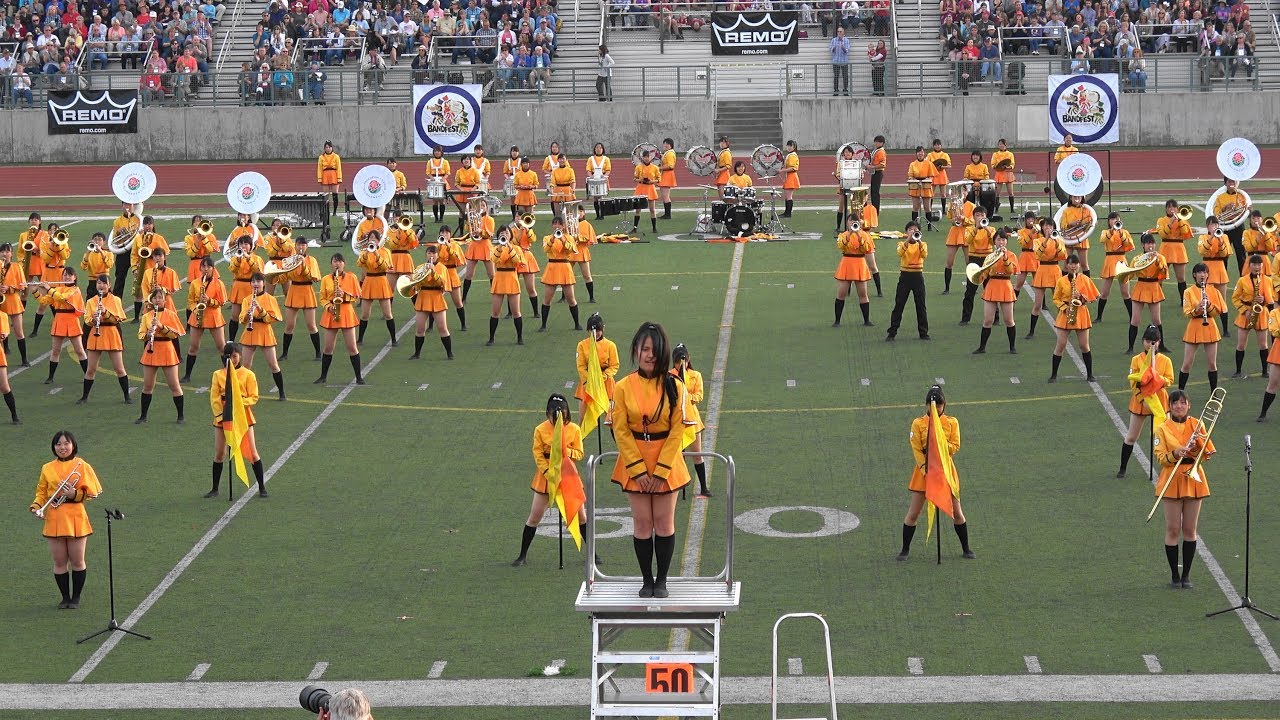 See more details of the Wind Music Club organization from the interview here.

The music the band plays is almost entirely Western, starting from gospel and big band era classics, and ending to evergreen pop songs and recent chart hits with heavy dose of Disney tunes interspersed. Music is chosen bearing in mind the expected preferences of the audience and how easy it is to adapt to the band dancing style. The regular parade program is about 15 minutes long and if needed it will be rolled over.

Based originally on the suggestion by Yokoyama-coach the band trademark dancing style was developed in 2005 based on the 1997 “Burn the Floor” ballroom dance show by 102nd Class Marching Composition Team, including euphonist Seiji Nakao (中尾征爾) and percussionist Kōhei Shiba (芝公平). All dance moves are choreographed by the band members themselves resulting to the unique Kyoto Tachibana -style of marching which has made the band adored in Japan and overseas. Band has also granted permission to other schools to adopt similar approach to their brass bands, such bands are Izumo Business High School Wind Orchestra and Ōnishi Gakuen Junior and Senior High School Brass Band.

Click here for more information about the instruments the band is using.

The trademark song of the band which is practically always part of the program is “Sing, Sing, Sing (With a Swing)” made famous by Benny Goodman in 1937. This wild dance is sometimes performed in parades as a standstill number but usually it is the last song (or encore) of any stage/field show and ends with traditional “Tachibana Plow” -formation and “Ey!”-shout. Several bandmembers have said that the reason they applied to Tachibana and joined the band was to be able to play and dance this song (video by I LOVE BRASS; starts at 6:30):

Tachibana parade nearly always starts with century old gospel tune “Down By the Riverside” which tells you to throw your aggression away and assume more peaceful way of life – what better message to set up proper mood for the band performance (video by 慶次郎前田, starts at 1:15)! 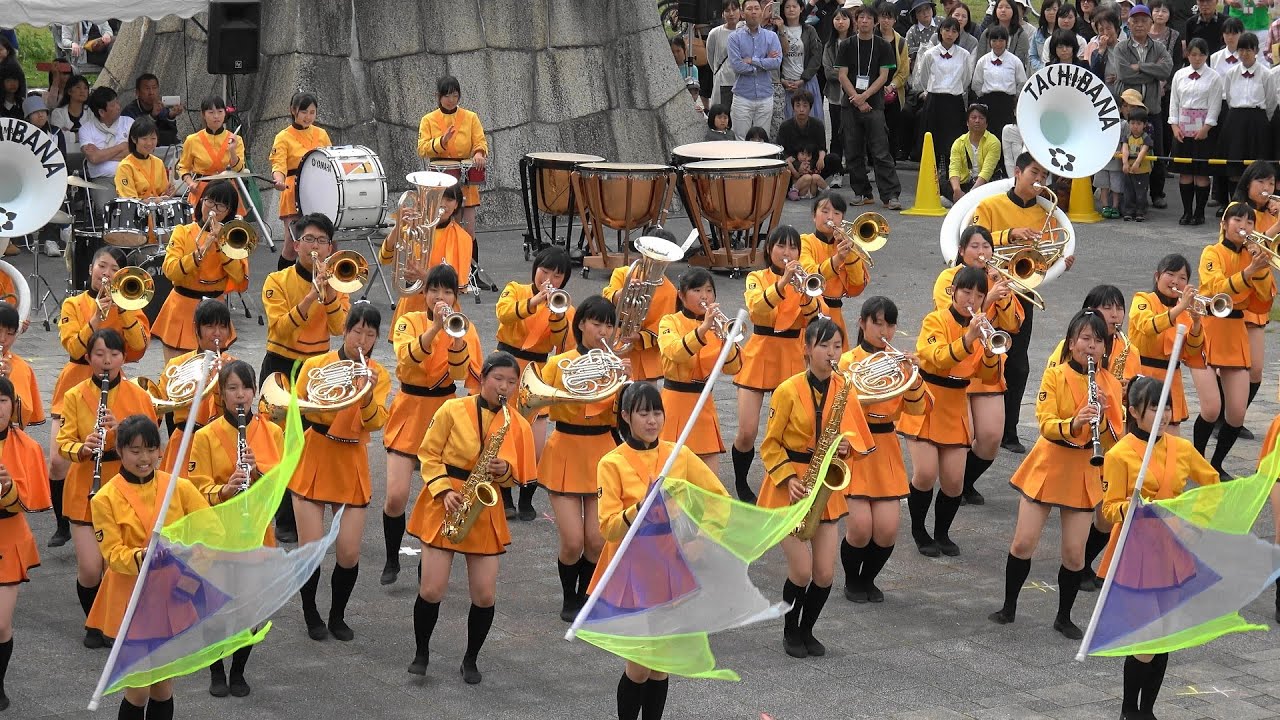 As an example of newer music here is Pharrell Williams 2013 chart hit “Happy” from animated movie Despicable Me 2 (video by sttaketo, starts at 16:04, and the ending pose at 17:50 is really really good!): 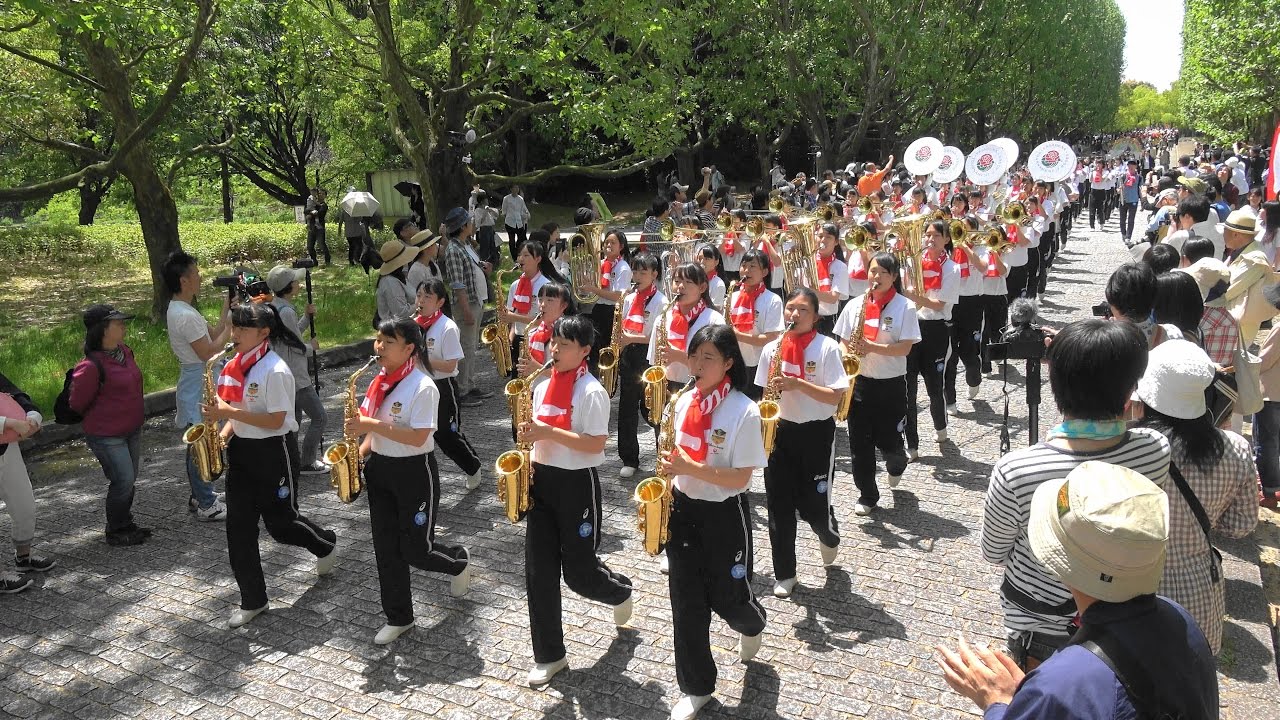 Oldie hit songs of the program are represented here by “The Loco-Motion” made famous in 1988 by Kylie Minogue (video by I LOVE BRASS; starts at 3:06): 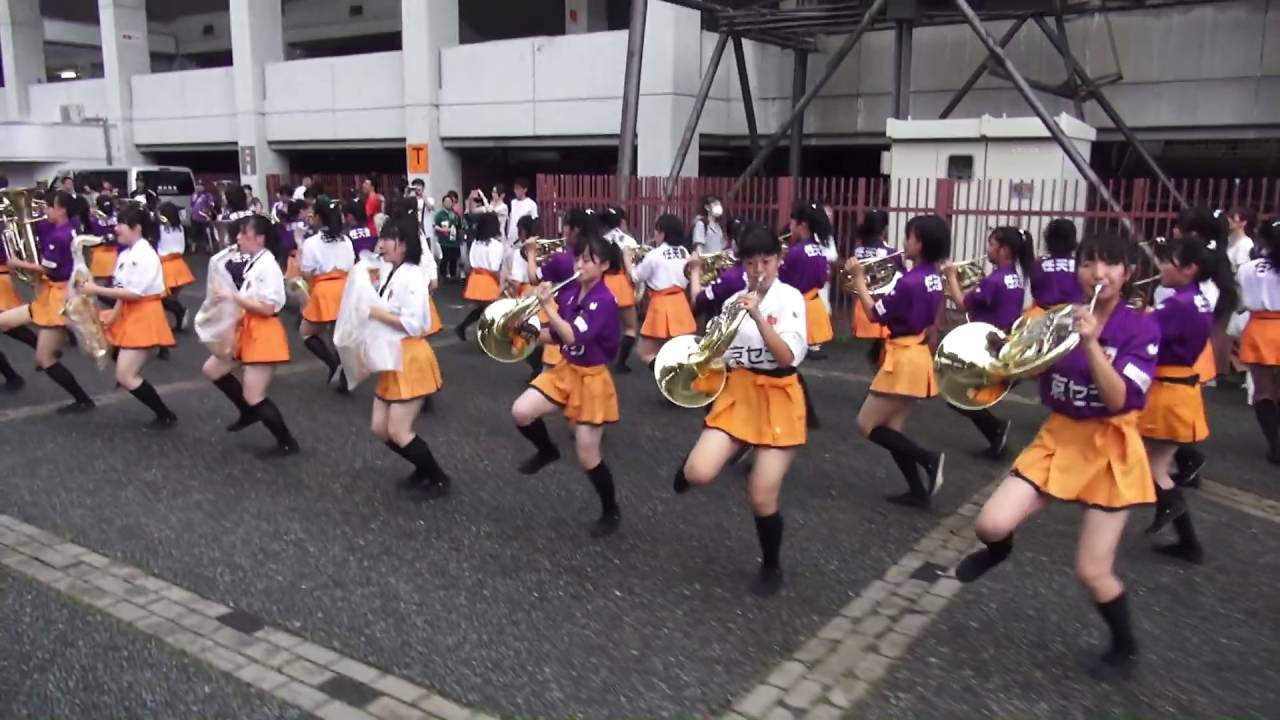 Disney Medley is integral part of any event and they play the catchiest tunes about 30s each and you can have fun listening e.g: “Bibbidi-Bobbidi-Boo” (from movie Cinderella), “Hi-Diddle-Dee-Dee” (from movie Pinocchio), “Who’s Afraid of the Big Bad Wolf” (from sequels of movie Three Little Pigs) or “Supercalifragilisticexpialidocious” (from movie Mary Poppins) (video by Marschtanz63; medley is between 5:18-10:57, and again 20:23-25:28, see detailed set list here): 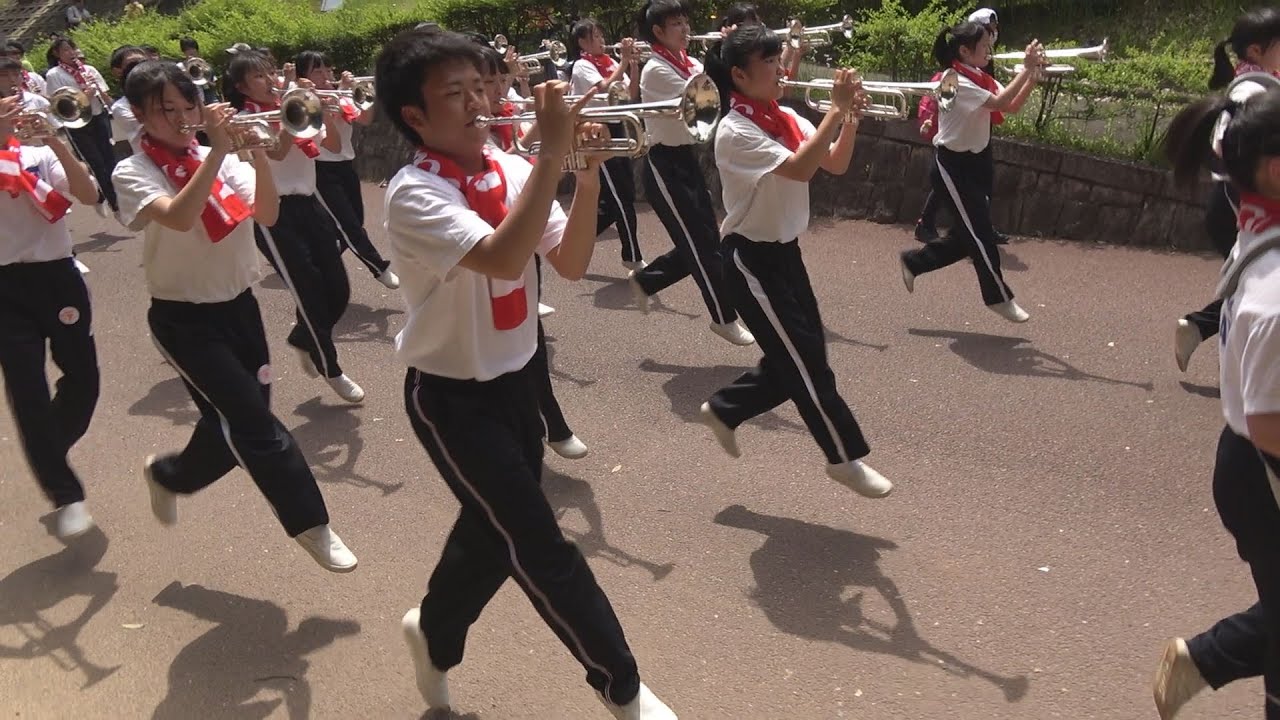 There is certain preference to South American music in the choices of the band and here they go exploring mambo and what better way to do that than playing “¡Qué rico el mambo!” by Pérez Prado, the King of the Mambo! (video by I LOVE BRASS, starts at 5:48): 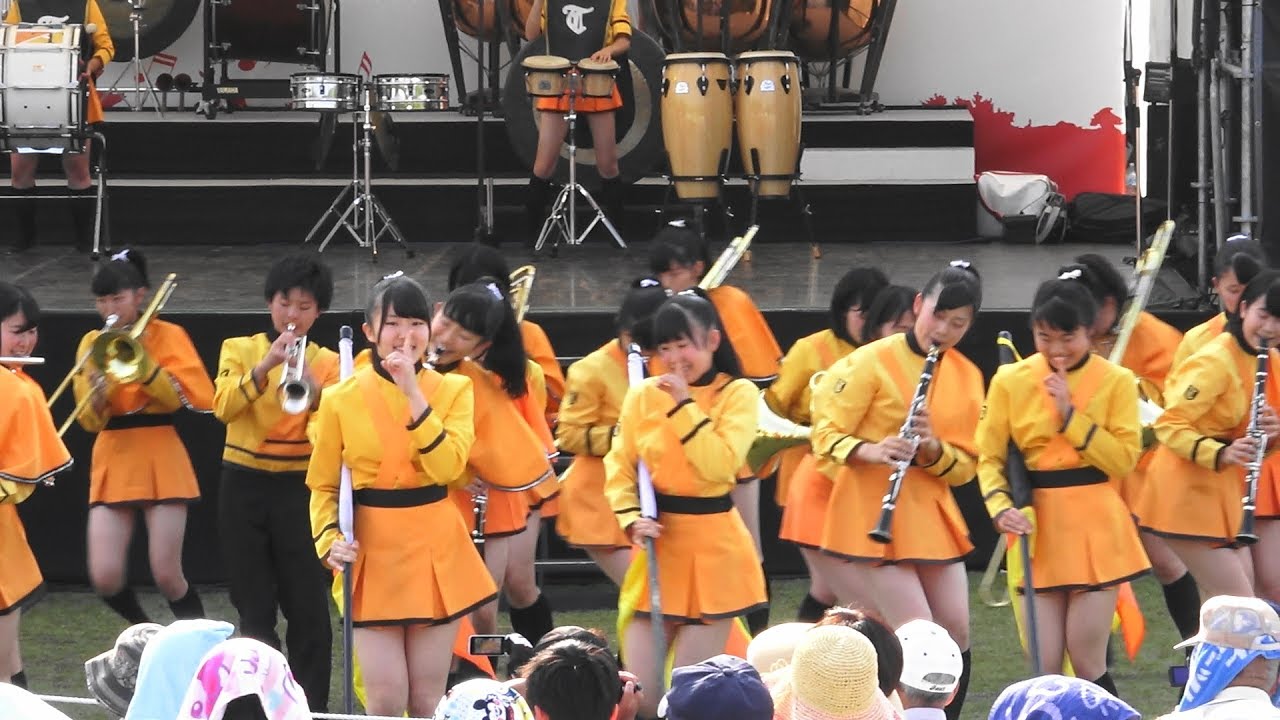 Japanese-origin music is a rarity in the band events but here is “Moonlight Densetsu” from the famous magical girl anime series of the 90s, Bishōjo Senshi Sailor Moon (video by st.taketo; starts at 0:30): 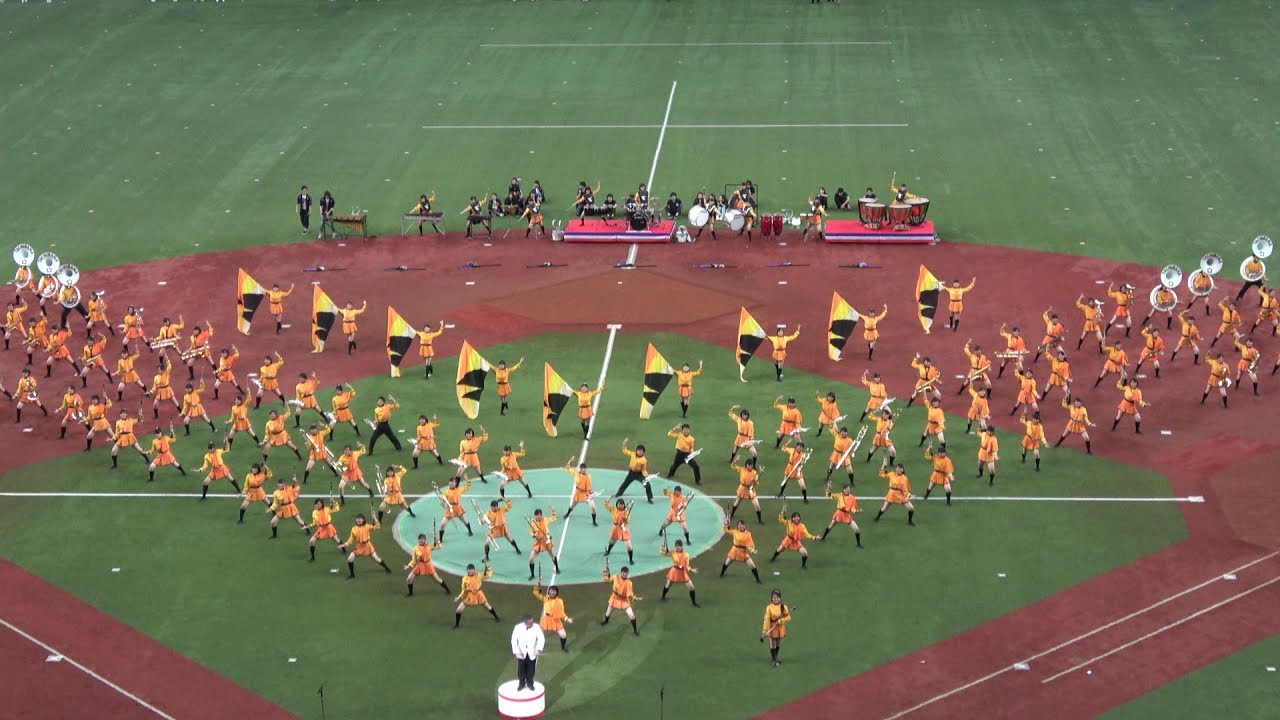 Stage/field shows in general are events where band performs larger selection of music, here as an example Glenn Miller “In The Mood” (starts at 7:31, video by I LOVE BRASS):

Over the decades the band uniform has of course been changed several times (see more details in this interview). The band current trademark orange uniform was designed in 1981 by band alumna Yamashita-san and is considered a symbol of luck and therefore worn in all competitions the band participates in. Color comes from Citrus tachibana -fruit (mandarine-like fruit growing native in south-western Japan) and the white hair ribbon represents the petals of the flower of the fruit (video by おーじろー２): 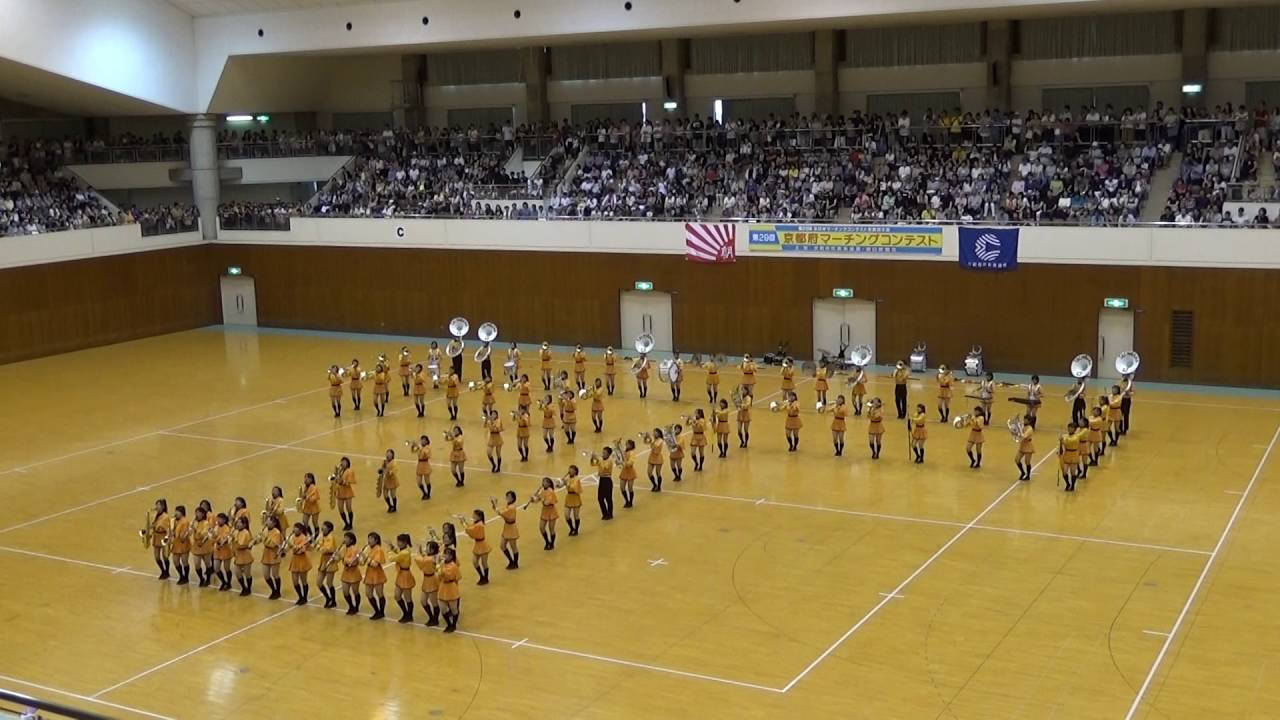 Blue-gold uniform has been the other main uniform but the band has practically stopped wearing it in public events since the end of 2016 and it is rarely seen any longer (video below by 慶次郎前田):

Blue happi-coat/white skirt combination (“Hawai’i uniform”) is used only rarely as band does not have enough of them for the whole band any more (video by MIKAN): 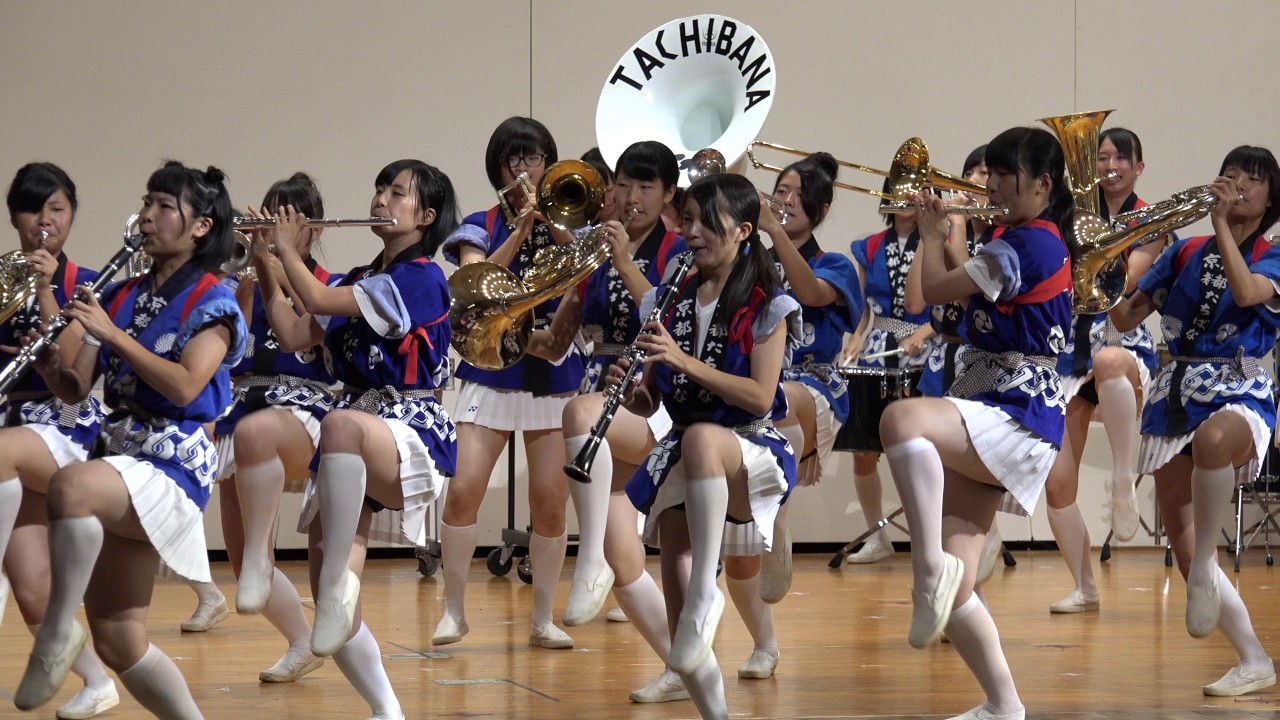 For sit-down concerts the band has used the combination of red jacket/white skirt and socks until the end of 2020 (see video below by Kazumi* Itani*):

New uniform was introduced at the beginning of the band 57th Regular Concert on December 24, 2020 and the band now plays in white tuxedo with orange handkerchief or tie and black trousers: 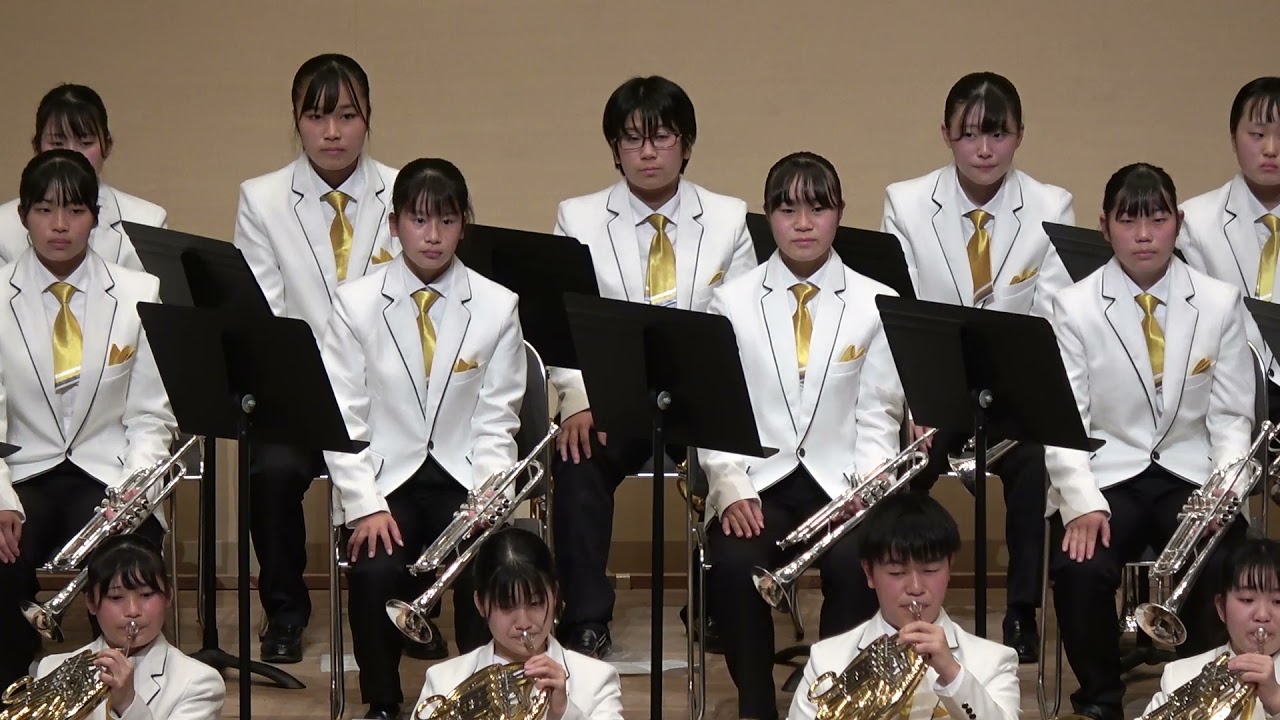 Occasionally the band also performs in their school uniforms. Here is the band in November 2018 playing in their new school uniforms introduced in 2017 with checkered skirt and light-grey jacket (video by Môde in The Japan): 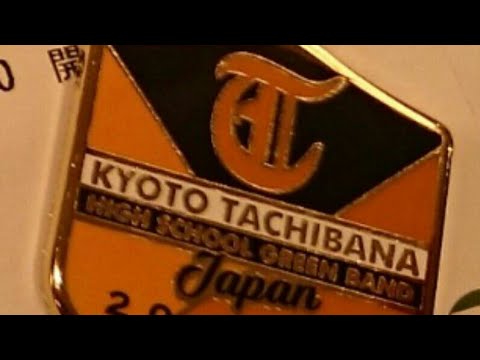 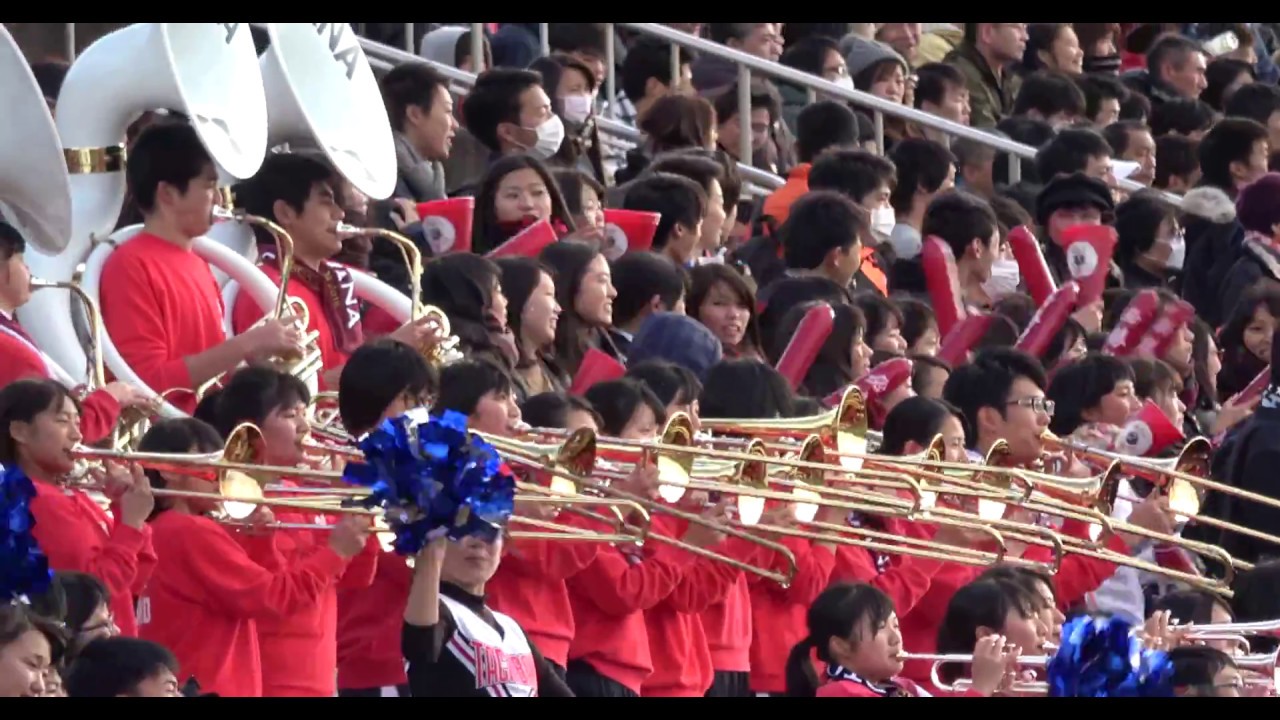 Although mainly used in practice, black tracksuit pants and white T-shirts are used in some events (e.g. Brass Expo like video below). Drum Major is recognized by the red “T” in her shirt (video by 慶次郎前田):

Members of the percussion wear also sometimes white or black tabard to protect their uniforms (video with black tabards by きりのんch): 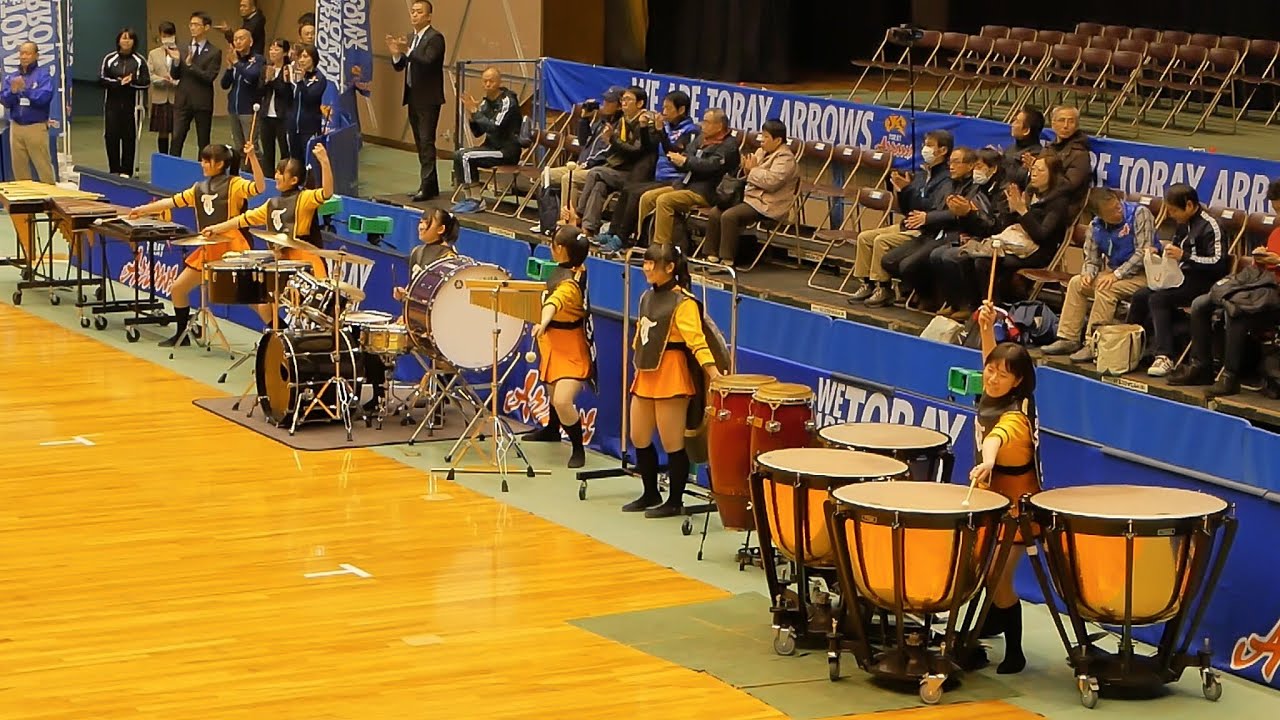 Regular events of the band over the year:

The first outdoor parade after winter break (and the last event of the school year) is typically Kyoto Sakura Parade late March. This is exciting for the fans as it is the first time we can see the new Drum Major and what changes are made to the routine for the year (video by I LOVE BRASS): 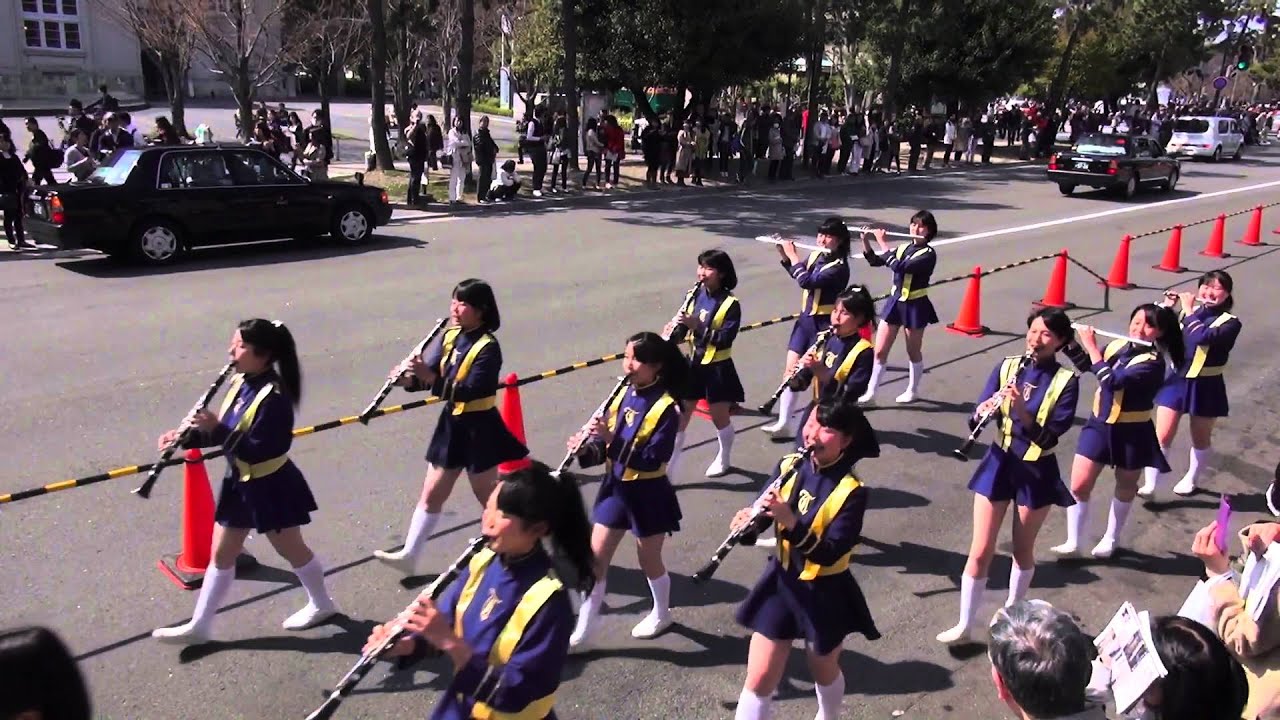 The highlight of the year is the Band Regular Concert late March at the end of the school year (note that this event used to take place in Christmas time before 2022 when it was first time held in March). This is the last concert the band 3rd year members play in. The concert is usually split in three parts: first part is “Classical Stage” with classical music, second part is “Pops Stage” with lighter music, and the third and last part is the wild Tachibana-style Stage Marching Show which culminates in the emotional farewell of the retiring 3rd year band members. It is very difficult to attend this Concert in person as the tickets sell out in seconds, but the band sells discs featuring the third part (stage marching show) of the Concerts in recent years (click here and here). Starting from the Concert in 2021 the event can also be seen as pay-per-view online stream.

School year starts in April and late that month freshmen join parade in Blumen Hügel Farm in their school uniforms marching behind the band clapping hands (video by 慶次郎前田): 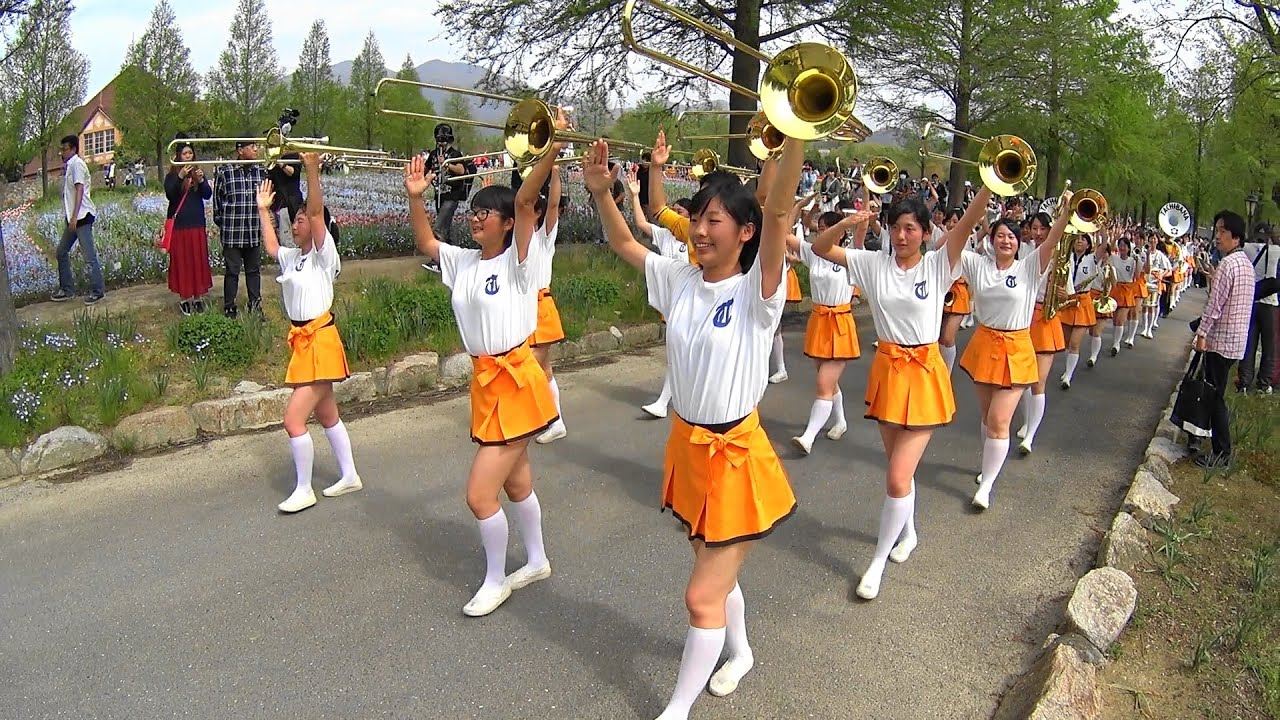 Freshmen marching debut takes usually place couple of weeks later in early May in Brass Expo (click here for details of their marching routes there) (video by 慶次郎前田):

In June the band typically participates in “Brass Band of 3000” Event at Kyocera Dome, Osaka (video by I LOVE BRASS): 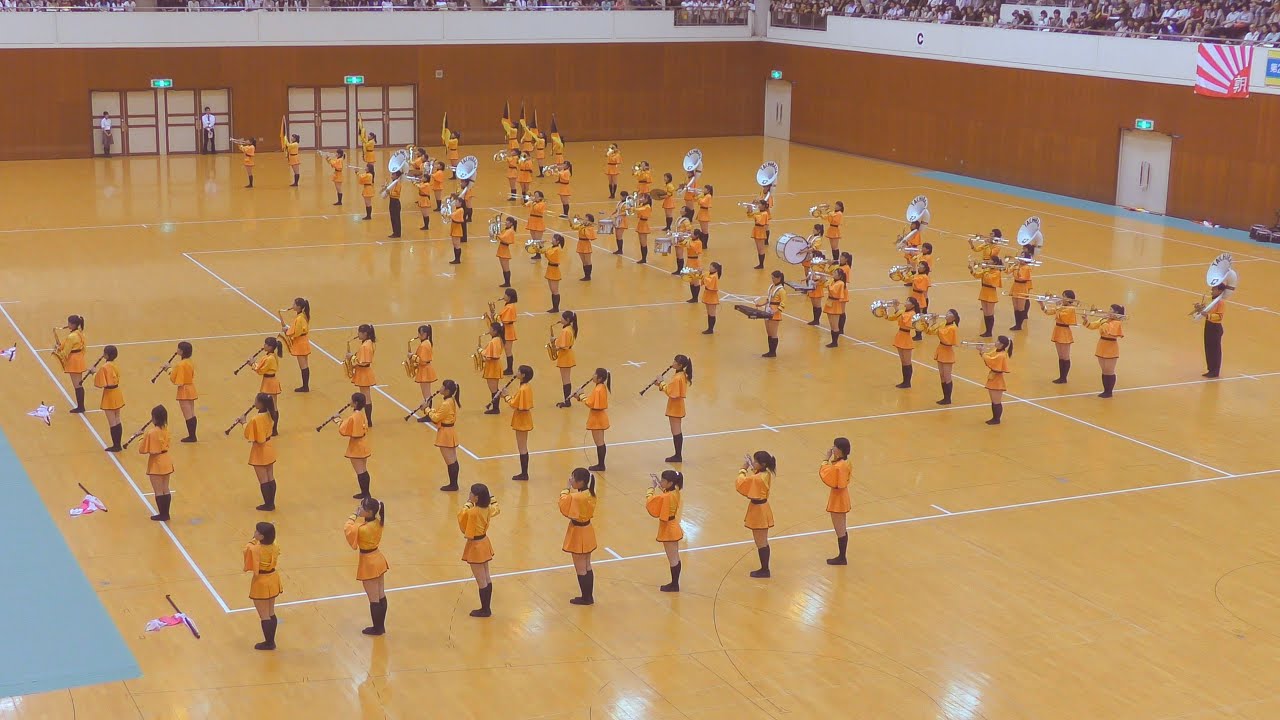 Telefax number to the band:

Please do NOT send cards, letters, gifts and the like to the band or the band members as the school policy is NOT to deliver them to the students.