“They are going to light up the street, I’ll tell you!”

2017 was the 115th anniversary of Kyoto Tachibana High School (see Anniversary Website here, in Japanese) and therefore suitable time for the band to visit US again as they were invited to attend 129th Tournament of Roses Parade, Pasadena, California New Year’s Day 2018 (see more of their first Rose Parade performance 2011-12 here). This time the band came to US with 200 members making it the largest Japanese band to attend the Rose Parade, and likely also the largest band formation Kyoto Tachibana has ever put together.

(quote above by President of 2017-2018 Executive Committee of the Tournament of Roses Lance Tibbet, see his interview here). 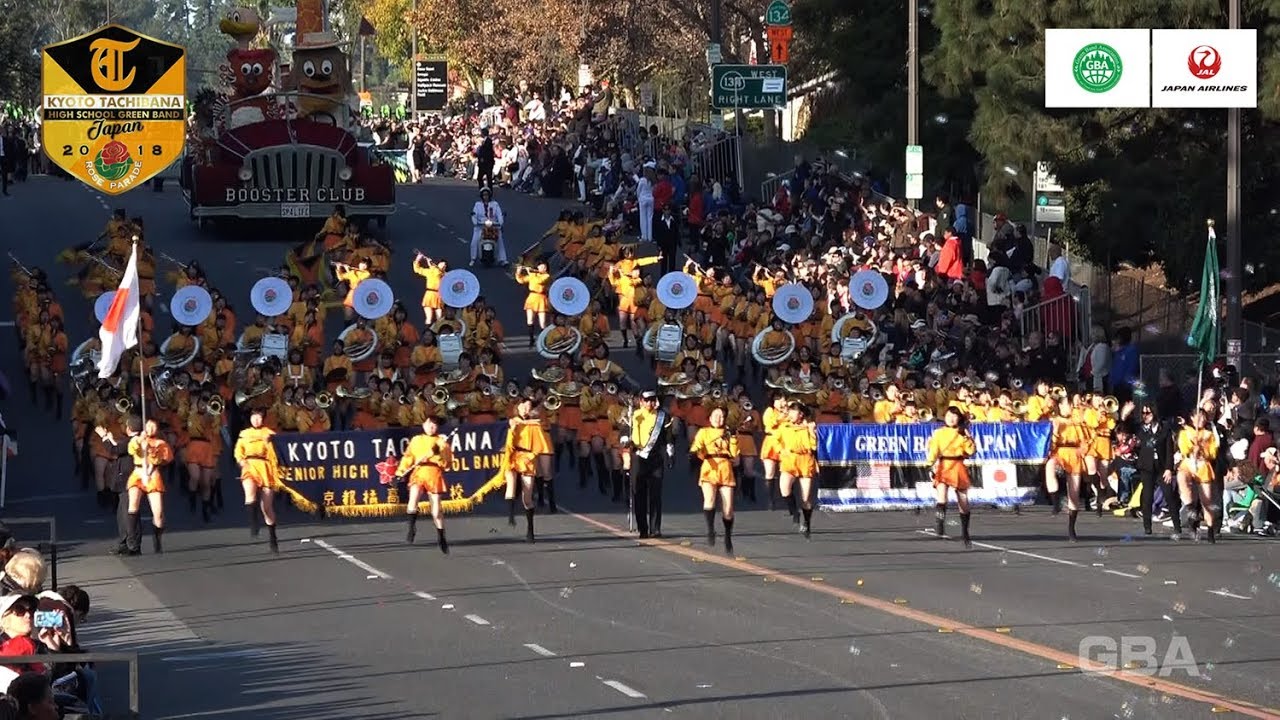 The above is the official Rose Parade -video by Green Band Association covering the first 23 minutes of the parade (including the famous Mario-turn).

Documentary of the visit:

“Return from Rose Parade” -concert was held at sold-out School Festival Hall on January 21, 2018 at 4pm (photo by school site). Last concert of 114th Class, sayonara! Report of the Rose Parade at school site is here (in Japanese), and an eyewitness story (in Japanese) here. Soundtrack of the concert is here, and the speeches during the concert are translated here. 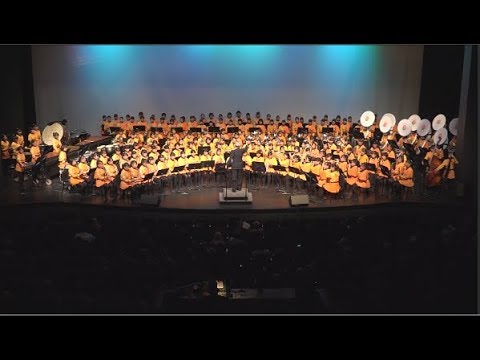 Tachibana final event on US soil was the Benefit Concert at Performing Arts Center at John F. Kennedy High School, La Palma, California on January 2, 2018 (video by Music213). Drum Major “Ron” leads the band to stage show opening piece, Otis Redding “I Can’t Turn You Loose” followed by “Soul Finger” by The Bar-Kays. “Ron” was kept very busy as she also took her clarinet and joined the band playing in the clarinet trio (she did the same at Bandfest too).

Then we have Jun’ichi Naitō latest work “Make Your Dreams Come True” which was commissioned by Tachibana and premiered in 54th Regular Concert at School Festival Hall on December 17, 2017 when Tachibana Middle School brass band was conducted by Kazumi Itani (video of the premiere is here, video below by Music213):

Memories of Bandfest: the main theme from the movie Jurassic Park and Disney “It’s a Small World (After All)” (video by Music213). Tanaka-sensei was looking worried and you soon understand why…

Esteemed band founding director professor Hiramatsu took the podium next and conducted Jun’ichi Naitō composition “Prayer and Honor in our Hearts” as he did also 6 years ago (video by Music213):

Tanaka-sensei got back to let us hear some Michael Jackson but didn’t do moonwalk… (video by Music213). We hear “Thriller“, “I’ll Be There” and “I Want You Back“:

Emotional high point was reached when band members went to say farewell to their host families while band played The Carpenters “I Need to Be in Love” (video by Music123):

…but of course there was encore and what else would it be than “Sing, Sing, Sing (With a Swing)” (video by Music213): 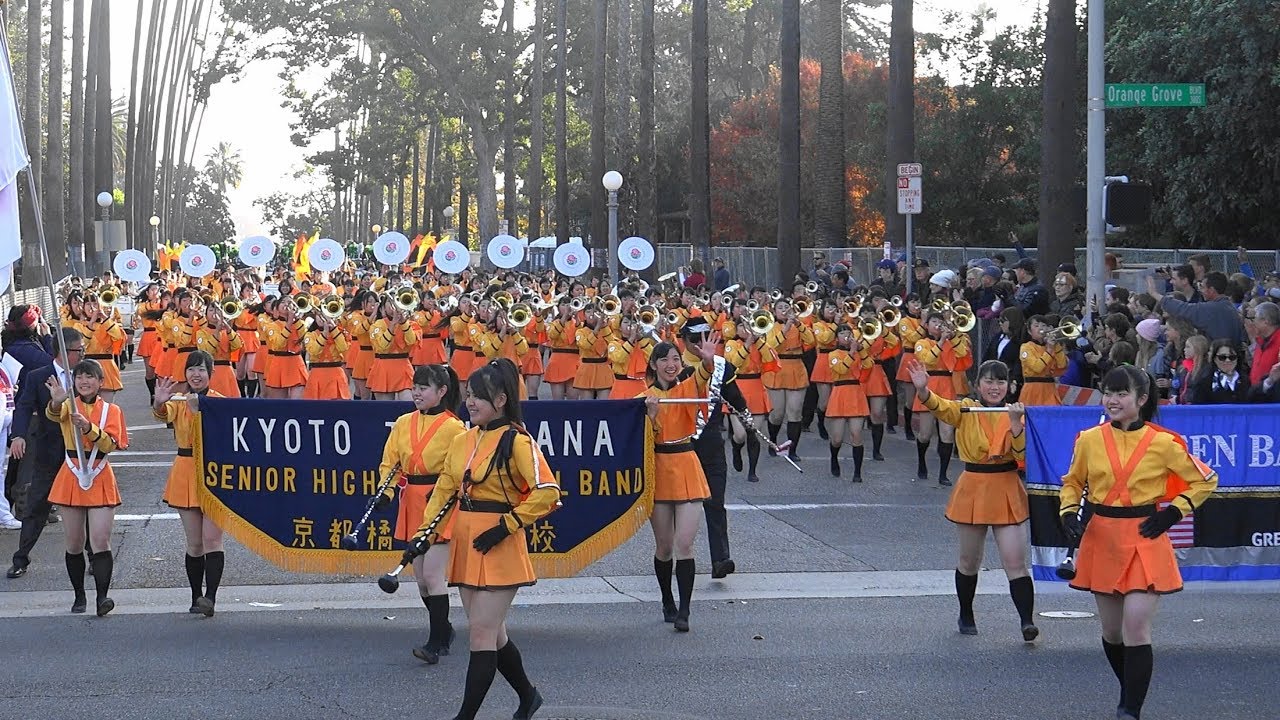 New Year’s Day 2018 and for their second visit to Rose Parade the 200-strong all-stars crew of Tachibana marches down the 5½-mile stretch of Colorado Boulevard led by three Drum Majors “Piimo”, “Ron” and “Cony”. In this best video I have ever seen from Rose Parade three videographers (慶次郎前田-san, sttaketo-san and Mark-san) combined their effort and they managed to transport themselves into several spots along the parade route to cover the progress of Tachibana from start to finish! I don’t know how these magical boys got space among curbside crowd but I imagine some nifty judo-moves were needed… At 0:40 you can see professor Hiramatsu heading for a brisk morning walk to celebrate his 83rd birthday. At 27:23, what if the parade stops suddenly? No problem, you just play some standstill “Sing, Sing, Sing (With a Swing)” to entertain the spectators. At 28:48 “Chippi” does solo dance! And at 35:55 we find the place the local Tachibana Fanclub is standing. At 58:04: finally the finish line! This video shows how Rose Parade should be covered – if you are a fan of one band only. 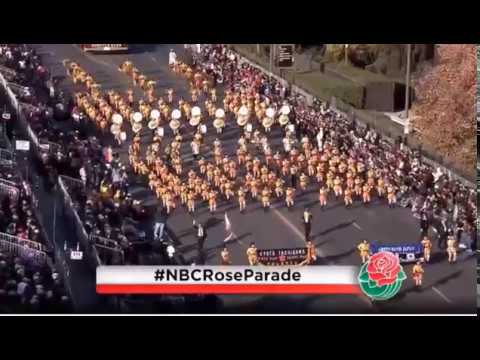 How did “Kurara” do? Here the band is passing Armenian Church which is close to the end of the route and you can see her dancing at 1:48 like this is nothing special. She can do anything! 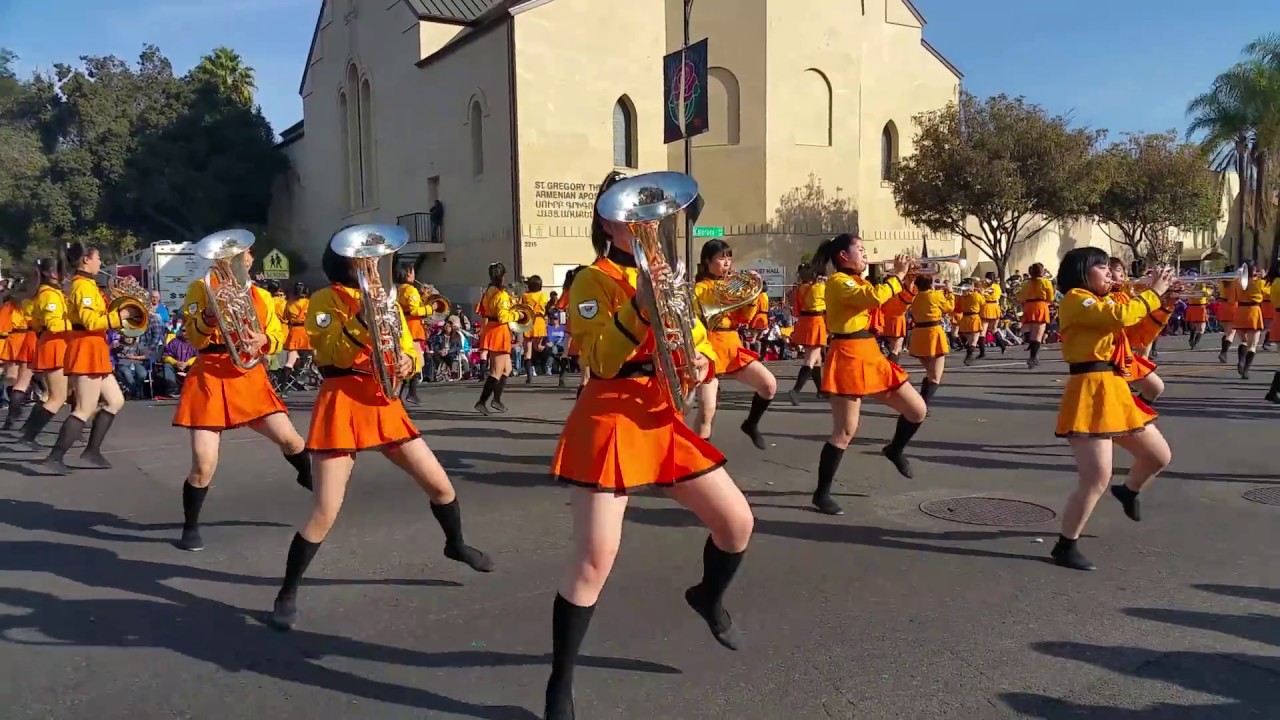 Here is how the band takes the notoriously nasty 105-degree right turn from Orange Grove Boulevard to Colorado Boulevard (video by Christopher Yee). The theme from Super Mario Bros. got the audience and this move is now called the “Mario Turn”.

And here is the band reaching in the final stretch! And they are still “Happy” (video by Isai Perez): 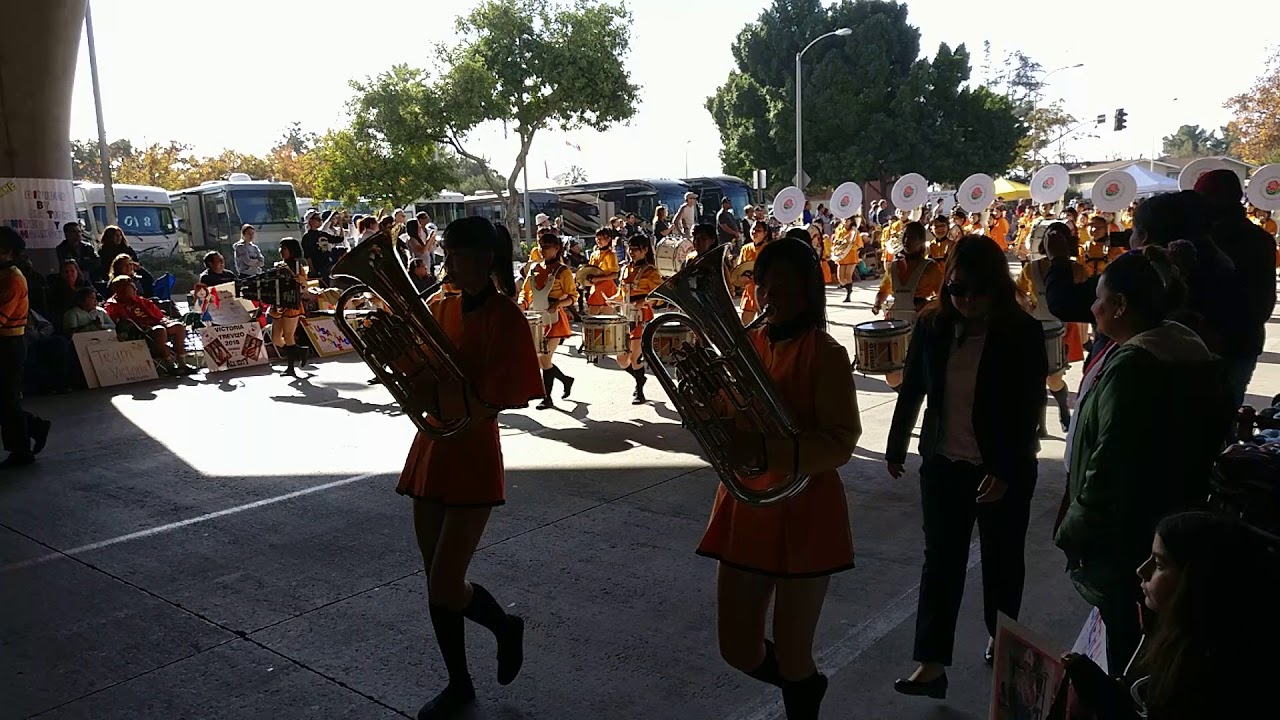 If you want to follow the band along the route and watch what they were playing where there is a tool developed for that: first download and install Google Earth Pro from here, and then download data file from here and open it with Google Earth. Click pins to see the video of band playing at that spot. This tool was developed to all Tachibana-fans by 818macot-san who will receive our endless gratitude. Similar tool without the requirement to use Google Earth has been developed by Yoshimitu-san and can be found here. 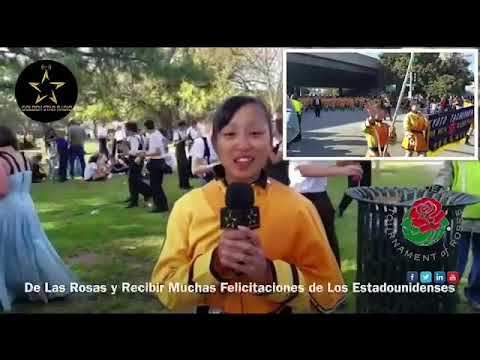 Also Drum Major “Ron” gave comments to Golden Star Radio: “I am Drum Major of Kyoto Tachibana High School wind music club. We had a special experience to participate in the Rose Parade, and we are very happy with the reactions of U.S. people on the roadside. I think that this experience will be unforgettable memories for the rest of my life. I would like to tell our juniors about the wonder of entertainment I have learned in the USA when I’m back to Japan.” (video by nakosoeki, translation by Ozekal-san): 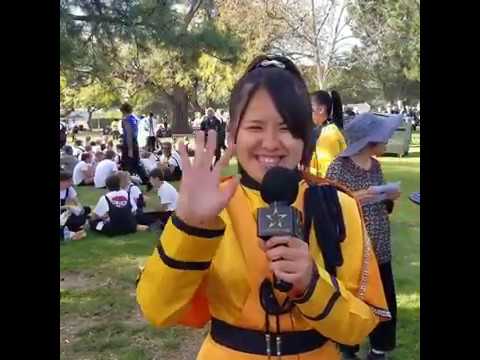 Replay of the KTLA-stream of the whole 2-hour parade is here. Tachibana comes in at 37-min mark. 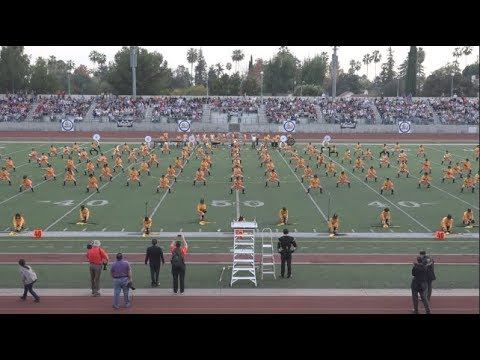 Was this one hell of a show! It is sold-out stadium on December 30, 2017 and we start with “Kurara” (see more of her here) getting special introduction and Drum Major “Ron” taking the podium to lead the band for classic jazz opening with Dizzy Gillespie “Manteca“, but it was Disney “It’s a Small World (After All)” which made audience react to the funny choreography. Then Yokoyama-coach took podium for the main theme from the movie Jurassic Park only to be invaded by orange Godzillas who brought doughnut to Mr Tibbet as birthday present (…I’m not joking here!). The finish was again very delightful “Cantina Theme” from Star Wars followed by the trademark last song “Sing, Sing, Sing (With a Swing)“. In the end we have bandpass led by the three Drum Majors, Tanaka-sensei got a drumhead too and band their prize-money (see more here), and “Kurara” took the final bow (video by Music213).

All Saturday afternoon performances in full can bee seen in the video by Pasadena Star News here (Tachibana comes in at 2h12min-mark). Other full Bandfest shows are here: Friday, Saturday morning. 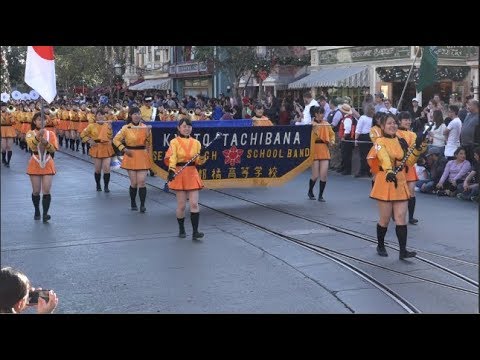 First time in full 200-member strength the band marched down Main Street, U.S.A., Disneyland Park on December 29, 2017 led by exclusive lineup of three Drum Majors, “Piimo” (2016), “Ron” (2017) and “Cony” (2015, and the last to bring National Gold to the band). It was a nice touch that the direction was credited not only to Tanaka-sensei and Yokoyama-coach but also band founder professor Hisashi Hiramatsu. We catch the band in the middle of Disney medley and then they go for standstill performance of “Sing, Sing, Sing (With a Swing)” – Tachibana trademark move (video by Music213). Among the returning alumni you can pick up just in front of the camera the lead drummer of the band from their previous Rose Parade -visit so she is now doing this twice (since graduation she has gone pro with three albums under her belt: Twitter, facebook, blog, online store). Watch band members waving and high-fiving kids at audience (…like “Tippi” at 4:46…), that’s showmanship Tachibana is famous for! Fans of “Kurara” can see her dancing at 7:10. Some additional pictures of percussion are here.

Another view on the same parade (video by Paul Miller). At 4:47 attack by high-fiving tubas! 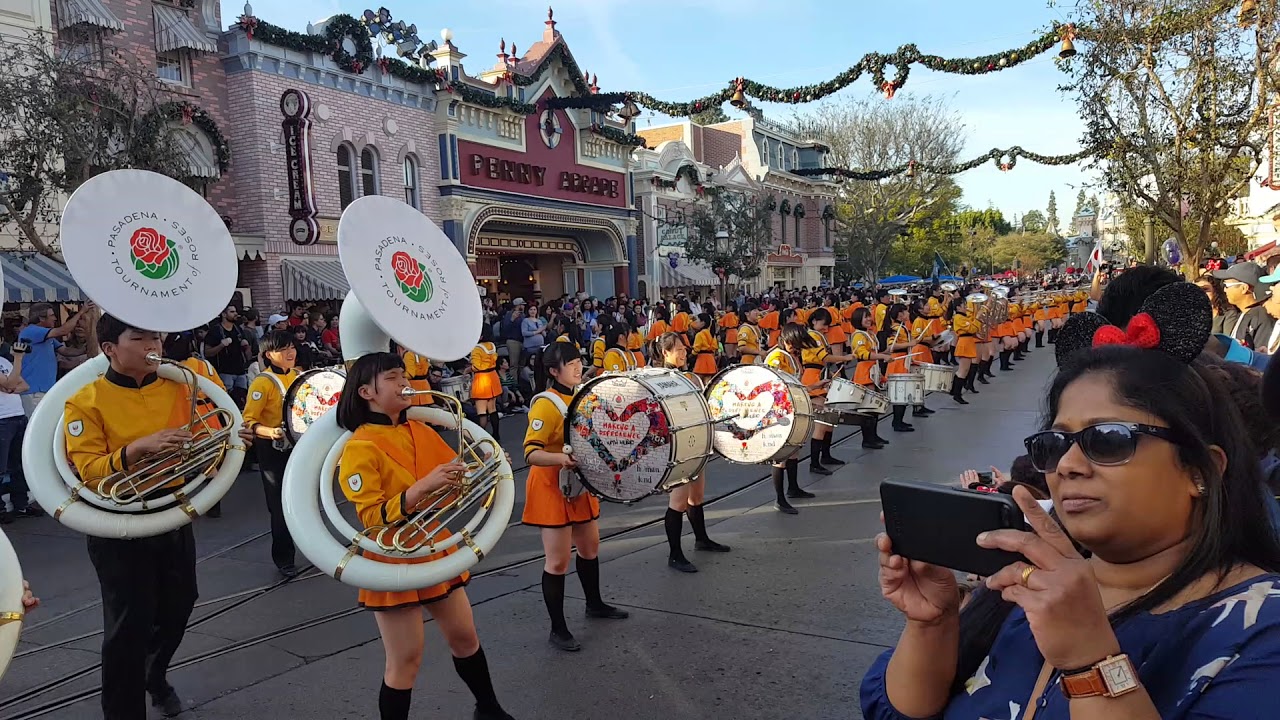 Orange Devils in Downey, CA. Hope they had time to visit the famous McDonalds there!

The Asahi Shimbun Osaka-edition features “Kurara” in their article

The Orange County Register lists 5 biggest reactions of Rose Parade. Guess what was one of them? (click picture) 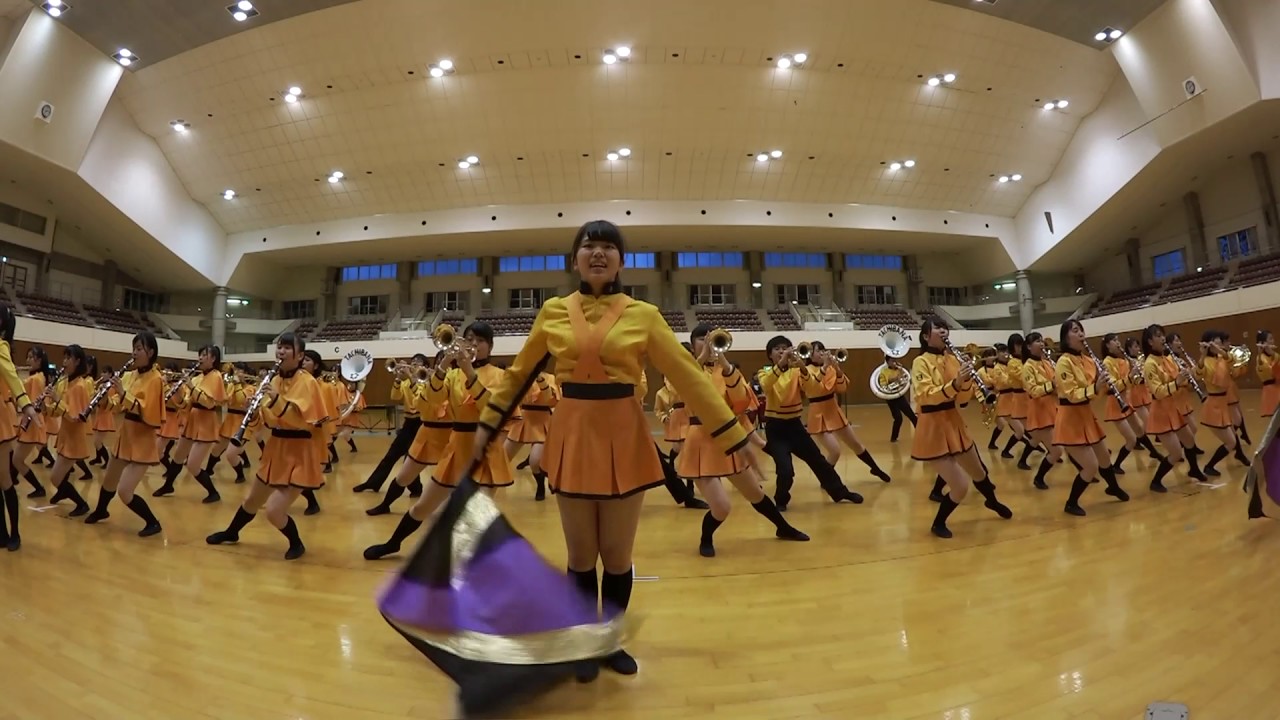 Green Band Association (GBA) published full-length version of their earlier video (see that here) used to promote the band at the “Making a Difference” marching band video contest (see more of that here and here). This stage show video will give you a taste what to expect at Bandfest and Benefit Concert, although of course in these events more music is likely to be played. 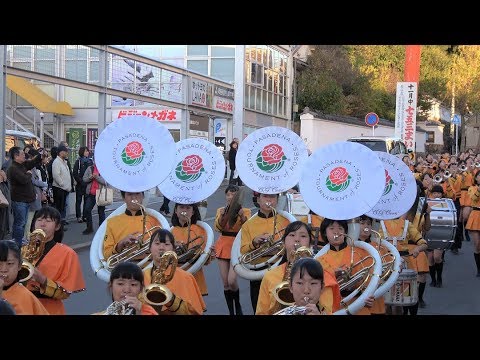 On November 23, 2017 the band paraded nearby their school at Fushimi Ōtesuji Shopping Street which could constitute as a “dress rehearsal” for the Tournament of Roses Parade (video by Marschtanz63). See the detailed set list with time-indexes here.

Set list of the above video:
1) Traditional parade opening piece of the band: “Down By the Riverside“;
2) “Happy” by Pharrell Williams from animated movie Despicable Me 2;
3) “Baroque Hoedown“, the theme song of Disneyland Main Street Electrical Parade;
M1) “When Will My Life Begin?” from Disney 2010 movie Tangled;
M2) “You Can Fly!” from Disney 1953 movie Peter Pan;
M3) “Friend Like Me” from Disney 1992 movie Aladdin;
M4) “That’s How You Know” from Disney 2007 movie Enchanted;
M5) “A Whole New World” from Disney 1992 movie Aladdin;
M6) “Mickey Mouse March” from 1955 TV-show “The Mickey Mouse Club“;
M7) “It’s a Small World” theme song of Disney ride of the same name;
M8) “Once Upon a Dream” from 1959 Disney movie Sleeping Beauty;
M9) “The Raiders March”, theme from the first Indiana Jones movie Raiders of the Lost Ark;
M10) “For the First Time in Forever” from Disney 2013 movie Frozen;
4) “Festa Do Interior” by Brazilian singer Gal Costa.
* Mx = played as part of (almost) Disney Medley
* Click the set list number for direct link to the video

Earlier posts of this blog:

Earlier posts of the 129th Tournament of Roses Parade of this blog are here and here.