All-Izumo Honor Green Band was chosen to perform in the 130th Tournament of Roses Parade, Pasadena, California on January 1, 2019. This was their second time to appear there, and they are only the second Japanese band to do so after Tachibana. See more of their previous visit 2012-2013 here. 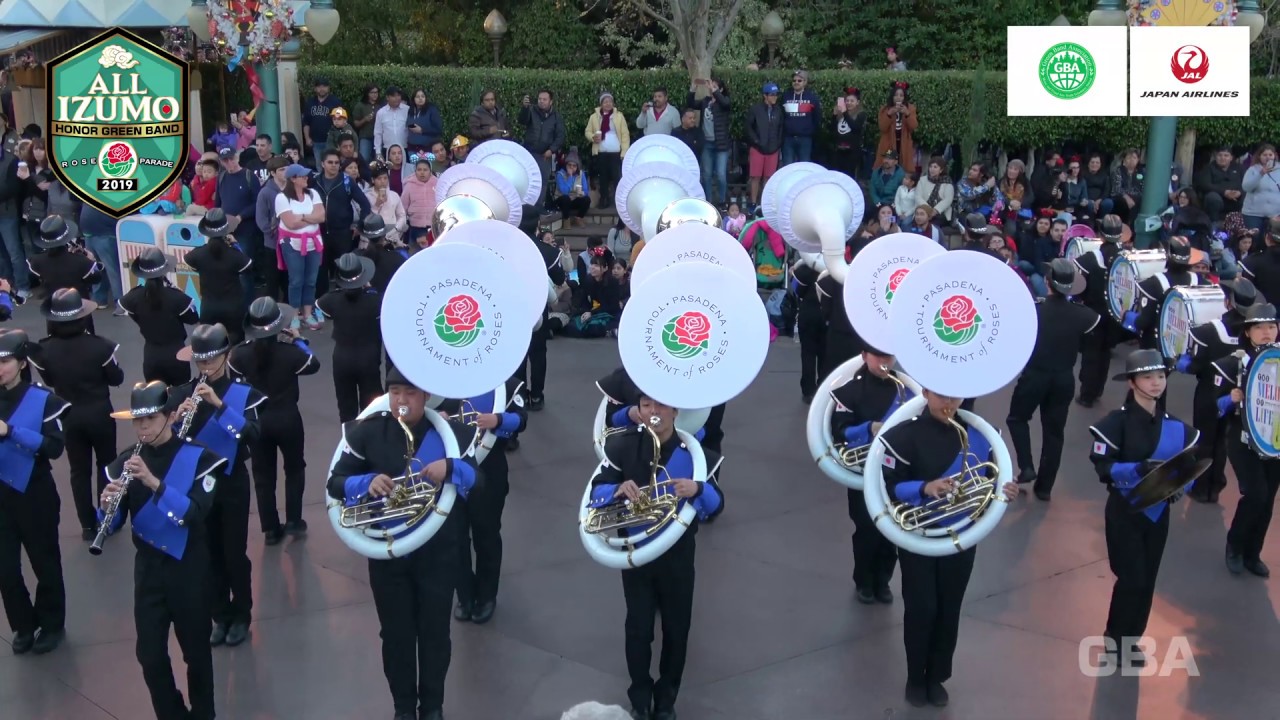 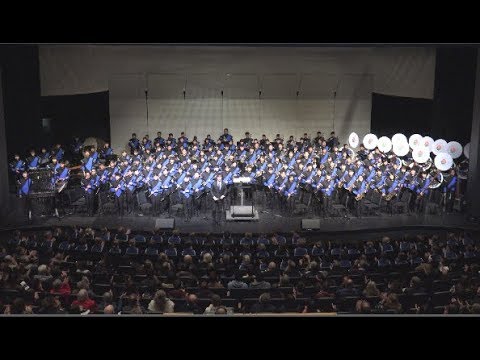 All-Izumo Honor Green Band performed after Marinens ungdomsmusikkår (Royal Swedish Navy Cadet Band, see their show here) at the Benefit Concert at Performing Arts Center at John F. Kennedy High School, La Palma, California on January 2, 2019 (video by Music213). Everything starts with “Olympic Fanfare and Theme” of the 1984 Summer Olympics at Los Angeles by John Williams. New Year is officially welcomed with “Radetzky March” by Johann Strauss I, and the band members say farewell to their host families to the tunes of instrumental version of “Stand Alone” from the 2009-11 NHK period drama TV show “Saka no Ue no Kumo” (composed by Joe Hisaishi, and original sung by soprano Maki Mori, see it here). Great finale included (of course) “Uptown Funk” by Mark Ronson and Bruno Mars, and “Y.M.C.A.” by Village People. 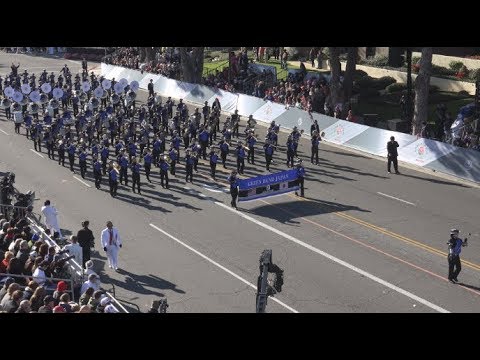 Band at the 130th Tournament of Roses Parade on January 1, 2019 (video by Music213). The tough right turn from Orange Grove Boulevard to Colorado Boulevard is now called the “Y.M.C.A.-turn”.

You can watch the entire parade here. KTLA broadcast of the same is here. 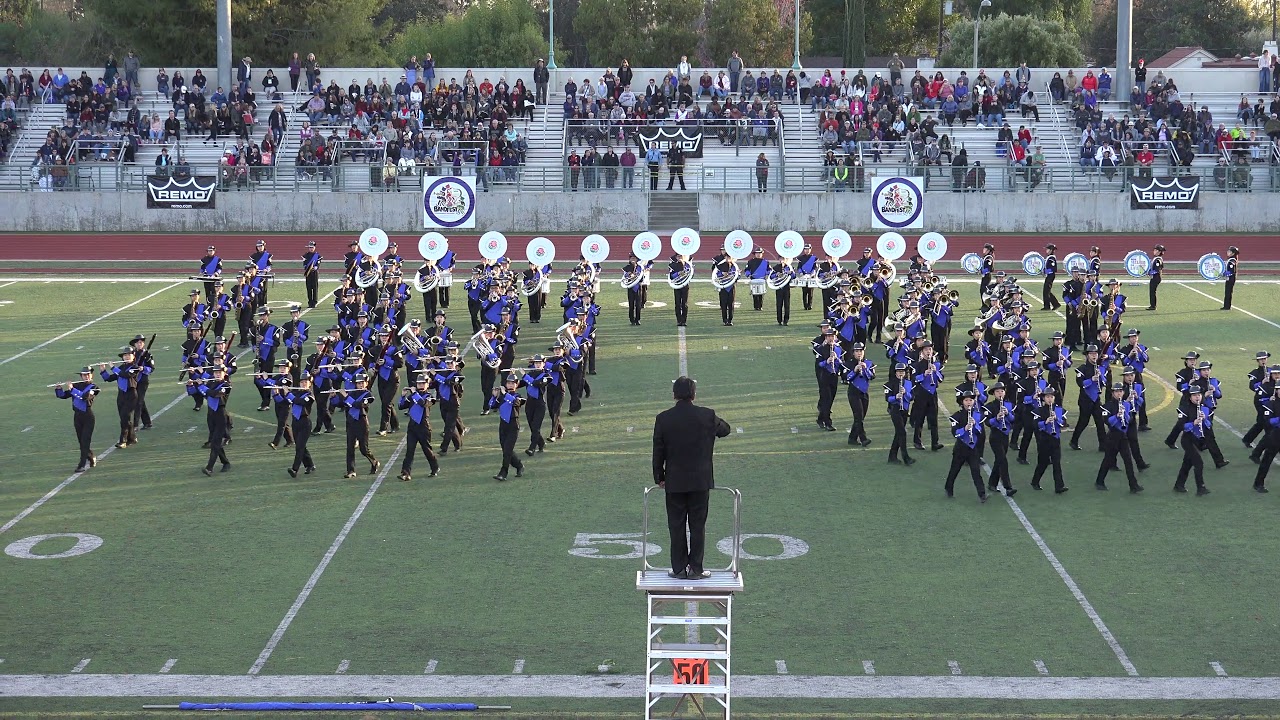 Band attended the 39th Annual Pasadena Tournament of Roses Bandfest on December 30, 2018 (video by Music213). They started boldly with Japanese folksong “Yasugibushi” (安来節) originating from the city of Yasugi (about 40 miles east from Izumo) complete with shamisen play, and finished equally boldly with “Y.M.C.A.” by Village People. 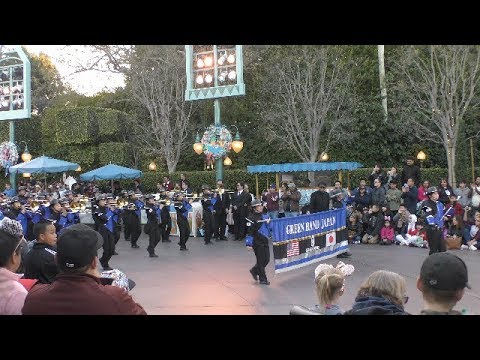 Band parading down Main Street, U.S.A, Disneyland Park, Anaheim, California on December 29, 2018 (video by MusicAmenities). The uniform is slightly updated from what it was at their first visit six years ago. Surprisingly Yokoyama-coach is not Drum Majoring this event! The standstill piece is “Uptown Funk” by Mark Ronson and Bruno Mars. Performance is credited to Yuji Katayose.

Tournament of Roses Association has declared “The Melody of Life” lip sync video contest among the participating bands of the 130th Tournament of Roses Parade. The contest videos are here where you can also vote for your favorite (voting period ends December 8, 2018). Unfortunately there are only very few videos published so far, and no video from All-Izumo Honor Green Band.

TV Commercial of the Rose Parade 2019 (video by Paul Miller): 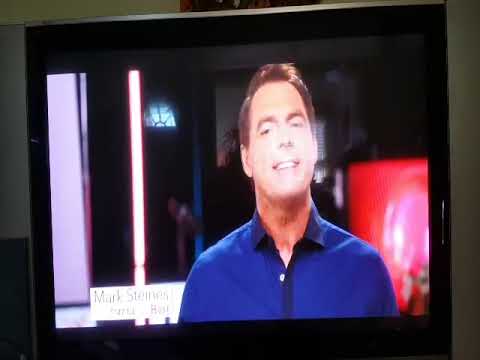 From the designer’s site (here, in Japanese), the event flyer looks like this:

And this is the band badge: