This text, which is a summary of the part of the interview conducted at Kyoto Tachibana High School on April 24, 2018 is specially written for this website by Rei’ichirō Fukuno (福野礼一郎, Wikipedia), a writer, with the request from orangedevilsfan and Trueman Nishi -san. The contents are divided into five parts. No contents that were pledged with Kyoto Tachibana High School never to be made public are included in this document. On the basis of copyright, no part of this document may be reproduced without permission. Also release of any Japanese texts translated from this English document will be strictly forbidden.

Separate article on Tachibana written by Rei’ichirō Fukuno has been published in July issue of GENROQ-magazine on May 26, 2018 (see more here and here).

The Number of Events a Year: 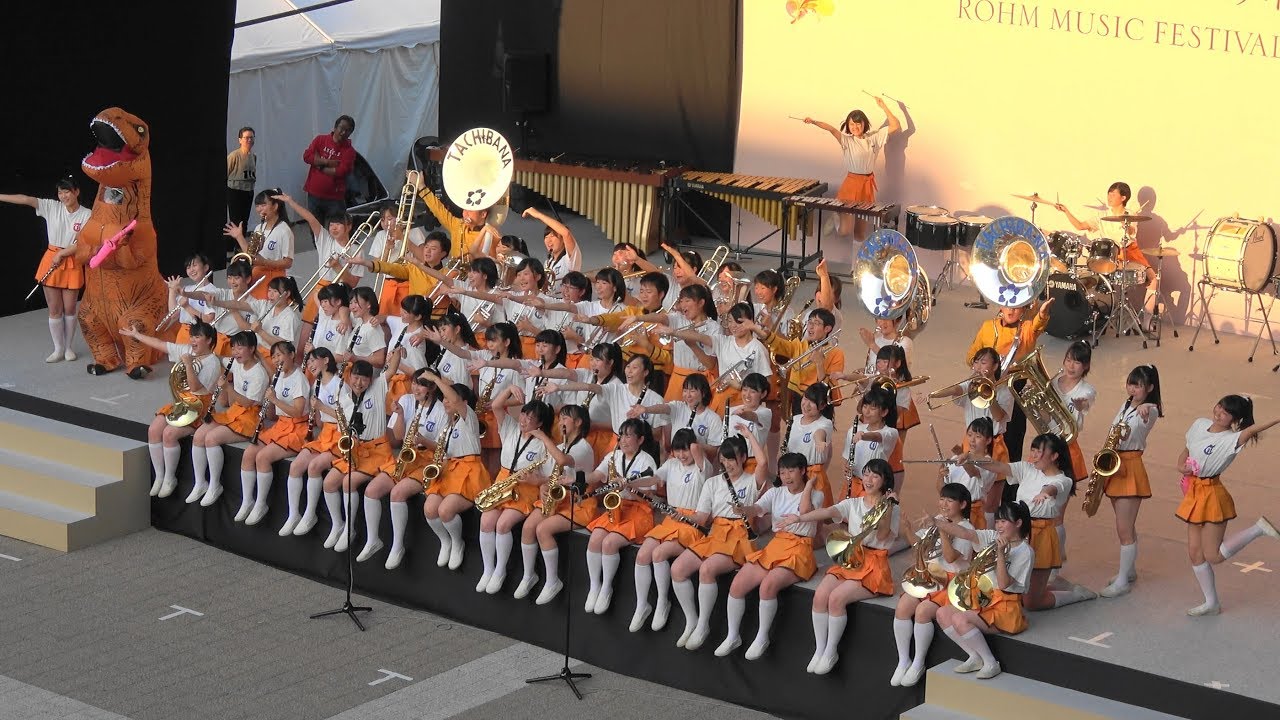 20 to 30 big events during a year. Only the ones that are open to the public, like a performance in the open air, are uploaded to YouTube, and there are many more performances given in other occasions. This year, they perform almost every Sunday at, for example, a festival invited by a musical instrument store (ROHM Music Festival), the opening ceremony for an international conference for doctors, nursery schools and elementary schools in the neighborhood, local music festivals, and so on. They can get used to performing, but they have less time to practice. Accompanying teachers also have to take turns taking Sunday off.

(see the band at ROHM Music Festival in the above video by st.taketo)

About Letters to Members etc.:

They never accept letters to students, presents, flowers, and so on. Even if those things are mailed to school, they can’t pass them on to the students.

About the Sale of T-shirts, Jackets, Flags etc.: 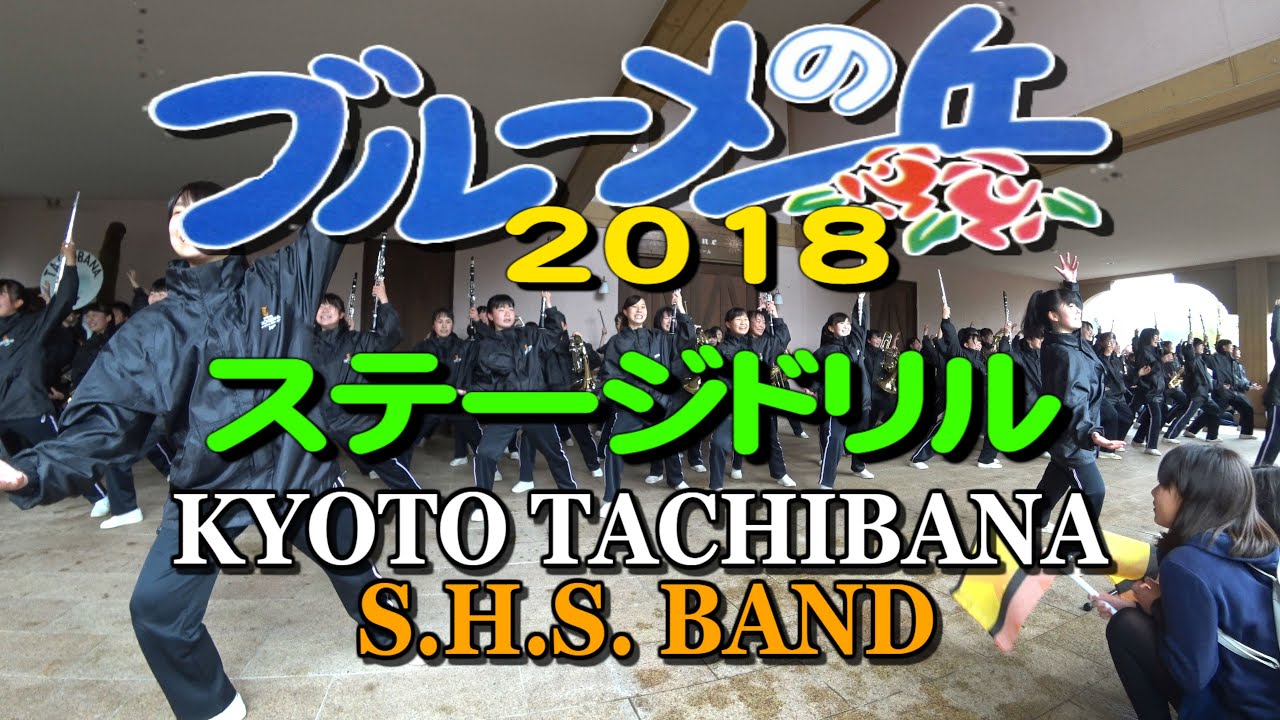 They don’t do that. The small flags seen at the Blumen Hügel Farm were made by a fan.

(see the small flags of the audience at the stage show in Blumen Hügel Farm in the lower right corner in the video by yasuky mark3 above – if you want to make your own flag see the instructions here, in Japanese)

The Wind Music Club is an extracurricular activity of the school. The primary job for Mr. Kaneshiro (Band Director Yutaka Kaneshiro) and Ms. Hayami (Band Assistant Director Akemi Hayami), both in charge of the club, is to teach school subjects and also act as a homeroom teacher. They are instructing and leading the club members sacrificing their holidays. Mr. Yokoyama (Band Coach Hirofumi Yokoyama) can’t come to school every day because he has to rush about all over the country to instruct marching. The school clerks are busy with general affairs for all the school events of the Junior and Senior High School. Moreover, the school has recently been receiving numerous telephone inquiries for the club about event participation from anywhere in and out of Japan, and also there are such thoughtless phone calls as asking “How do you practice that?” from persons involved in marching at overseas school bands. They are simply overloaded. Because of that, the reality is that they can’t afford to make a club website or use social network services or the like to offer information.

Mr. Yokoyama: I am freelance, so I can’t come to instruct every day. As a result, voluntary practice is the basis in Kyoto Tachibana. Basically, students teach students at daily practice, be it musical performance, dance, or marching. Many wind music clubs ask outside experts to make composition designs for a fee, but in Tachibana it’s a tradition that they make them by themselves. Since they are deeply involved in the making of performance, they know the important points of practice, can give a right guidance to each other, and can modify or change the composition by themselves. Even when I am not there, they can go on their practice on their own. To be more specific, juniors and seniors teach freshmen, but since they were in the position of being taught only a year ago, they know quite clearly where is difficult, how it is difficult, what the problem is and how you can get over it. As they are fellow kids, they can sympathize with the freshmen. They can teach them really considerately. Another merit is that by teaching others, you can improve your skills as well. When they start to teach the freshmen, juniors and seniors not only improve their performance and dance skills, but also mature rapidly. I can notice that by watching them. We instructors watch over the whole band, and give them guidance when we find something to be improved or important points in our professional experience, but never say “Do this,” and “Do that.” This is because commands and orders alone never ever build a real, tight teamwork. Also, by all means, I myself always want to hear from the students what they are thinking like “I want to do this”, “I want to do that” too. Listening to their opinions broadens my horizons, too. We choose songs, and make choreography by exchanging hopes and opinions to each other: “I want to do this.” “We want to do this kind of things!”

Mr. Yokoyama: The yearly Marching Contest has a limit to the number of participants, so we need a selection. In Tachibana, the kids do the selection all by themselves. “The members who practice hard” are to be selected, rather than their grades or skills. This is because unserious members, however skillful they may be, will work against the band, and if you practice hard, you will surely be a good player. But we, the teachers, don’t necessarily grasp the real scenes of their practice, and how they really feel, so we can’t choose anyone. The Section Leaders carefully watch the members who practice really hard and come to recommend such members to us. The grades have nothing to do with the selection. Every year junior-dominating-senior kind of cases can happen, as in the case where a freshman is selected and the senior who taught her until yesterday is eliminated. For the solo performances as well, the kids in each section hold an audition and decide who to play. All I do is instruct the kids chosen by the students. They, of course, select Drum Majors by themselves.

Mr. Yokoyama: We want Gold in the All-Japan Marching Contest. The students also make superhuman efforts for it 7 days a week, 360 days a year. You may not know correctly, but playing the instrument while dancing is extremely difficult. If you play an instrument, I want you to try it. Yes, extremely difficult. Technically, there are knacks and points, to be sure, but once you go beyond them, it isn’t a matter of theories any more. The belief and power that “I will surely be able to do that because senpais can do it properly,” “No matter what, I have to carry it through,” have made the impossible possible year in and year out. If senpais flew with their wings spreading before their eyes, the freshmen would surely fly in the air acquiring their own wings after six months. But even if you did that much… as long as the main rating factors for the contest are musical performance and marching, your points will be deducted if you will dance there and that affects your musical performance even slightly. They know about it more than anyone. But we don’t want Gold by forcing ourselves to do the same things as others. The students and I never want to throw away our identity that expresses “This is what Tachibana is about.” I think the Wind Music Club of Tachibana is a pioneer of youthful, cheerful, and peaceful marching. I ever have some difficulty and the students are tough to treat, but it’s really worth challenging.

About Wind Music Band at Japan:

In the beginning, Japan’s wind music started with the Satsuma military band (薩摩藩軍楽隊) under the guidance of John William Fenton (1828-90) of the British Army 10th Foot Regimental Band who came to Yokohama in the early Meiji Period after Japan opened the country to the world, and also with the Imperial Japanese Army Band (帝国陸軍軍楽隊) under the guidance of Gustave Charles Désiré Dagron (1845 – 1898) of the French Army. Military-style marching bands spread and developed mainly around Tokyo. That trend led to marching education at schools. After the Second World War, members of the United States Marine Drum and Bugle Corps that was stationing at the US Naval Base in Yokosuka taught American-style marching to the local schools, and in the meantime, “Japan Parade Band Association” (the predecessor of “Japan Marching Band Association (JMBA)) was established mainly by the members of Kanto Gakuin. As you can see, the marching sphere in Japan is divided into two groups: the “Tokyo-centered faction” that has inherited the tradition of military-style marching since the Meiji Period, and “the other faction” that was born after the Second World War. There are few personal exchanges between them. Kyoto Tachibana Senior High School Band is in the latter group. Due to the fact that the major media in Japan, as newspapers, magazines, and TV, are centering on Tokyo, if something or someone is little-known in Tokyo, they can’t receive national coverage, and as a result they will be virtually unknown in Japan. This is the reason why Kyoto Tachibana Senior High School Band is generally not well-known except in Kinki (=Kansai) Region. Incidentally, no major TV network stations, national newspapers, or magazines have reported on Kyoto Tachibana’s participation in the Tournament of Roses Parade.

Mr. Hiramatsu (Founding Director Hisashi Hiramatsu): Marching in Tokyo is a high-toned military style. Naturally, there’s no smile. They don’t smile. But we are in Kansai. We are a girl-centered band. That’s why we want to march in a cute and merry way. We have been doing with this policy since we established the band in 1961. I have asked the incoming teachers to do so. I have always been thinking that one day, the world of marching should break away from the military style. The “unified beauty” is important, to be sure, but if it is the marching that expresses the “strength” of a nation, organization, thought, and education, I should say it is sad. I have always wished that marching should be the one that would give adults a dream in the youthfulness, and that would comfort you and make your life happy.

Kyoto Tachibana “sei-eis” in Rose Parade, Pasadena, California, US in 2018

The seventeen-year-old Drum Major answered my question matter-of-factly, “The daily morning practice is from 7am to 8:30am. The after-school practice is from 4pm to 7pm. The Saturday practice is from 1pm to 7pm. We practice from 9am to 7pm on Sundays. And we have three-day summer vacation!” It’s obvious to everyone that they just have to put in the single-minded effort to practice in order to acquire that surprising performance in only three years in high school. And unbelievably, it is an act that asks nothing in return. No pay. No personal glory that shines on them. No support from the state and the public administration. Their selfless efforts are devoted to the highest-dimensional humanity that far surpasses the races, languages, thoughts, and borders. That’s why even emotionally mature adults are deeply moved to see their dedicated figures. The 1,000-day effort of sweat and tears that expects nothing in return – We Japanese call such people who have finally attained it “sei-ei” (精鋭) with esteem and respect. About 100 “sei-eis”, when their strength gathers, a little miracle occurs in this world. If my dream were to come true, I would like them to travel around the world and show their performances. At that moment, the world would be a little peaceful. Glory to Kyoto Tachibana Wind Music Club. You are marvelous.